The Hopkins County Commissioners Court met on Aug. 9 to discuss budget amendments and the planned Dike solar farm, among other items of business.

The meeting was called to order at 9:03 a.m. After an invocation by county judge Robert Newsom, Dike citizen Michelle Barnes presented herself for comment.

“I want to know who is lying,” Barnes demanded. “In July, it was stated they [the solar farm] were still in the planning and permitting stage. They said they did not know exactly where they would be putting the solar panels. But that’s not true.”

“Why in this picture,” Barnes said, demonstrating an aerial photograph to the court, “show hundred-year-old post oak trees cut down over half an acre? This is a drone shot of the actual solar plant site. So someone is lying to us.”

Barnes told the court she believed that logging to create solar farms was “morally and ethically wrong.”

Commissioner Pct. 3 Wade Bartley, who oversees the maintenance of roads in the Dike community, responded to Barnes by stating he had lived in Dike for 71 years.

“I can honestly say I have a vested interest in the Dike community,” Bartley said. “I would not do anything that I thought would destroy that community, and I want you to know that.”

Citizens Kristi Brewer and Tommy Long appeared before the court to request a deed for a property located near North Hopkins in the community of Addran [see related story].

After some discussion regarding the history of the Addran community, the court unanimously granted Brewer and Long their requested deed.

County auditor Shannah Aulsbrook presented that the county was ready to deploy the grant they had received from Staffing for Adequate Fire and Emergency Response Grants (SAFER) and required commissioner approval to name a committee to disburse the grant.

Sheriff Tatum informed the court that the Texas Rangers had their quick-response unit set up at the Civic Center for a demonstration, if the commissioners would like to see. The commissioners and judge indicated they would.

Aulsbrook stated the court needed to approve a $20,000 grant from the Sabine River Authority, which had been gifted to county emergency management the previous week.

The court also unanimously approved a donation of $5000 from Mark and Holly Ermore to make repairs to County Road 4724. 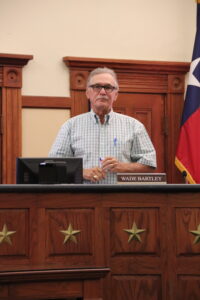 With no further business, court was adjourned at 9:39 a.m.