August 2021 marks the 80-year anniversary of the founding of the North Hopkins community, and its residents are proud to celebrate the resilience and endurance of their area while retaining their individual identities.

In the late 1800s, residents of the now-defunct Hopkins communities of Macedonia, Sand Hill, Addran and Corinth found themselves in need of a school for their children. According to original research by Sulphur Springs mayor and local historian John Sellers, on September 13, 1876, A.M. Martin and his wife Mary deeded half an acre at what is now County Road 4746. Additionally, on December 29, 1916, S.M. Long and his wife, Edith, deeded an adjacent acre of land to T.J. Tucker, Hopkins County Judge, to use as an area to construct a school.

With enough land to build a school, citizens did so, and many generations of children formed fond memories of their school days in northern Hopkins County.

“All these little places we grew up in have such history,” Long said. “For a family of four or five kids to have a school within three or four miles, the school was what was happening.”

Accounts from the time confirm Long’s assessment that the community school was a center of community life. A 1939 issue of the Sulphur Springs News-Telegram announced that the US Department of Agriculture was conducting educational meetings at the school. In 1925, fifth graders organized a community Thanksgiving pageant.

Long recounted the story of the Vaden family, whose children walked approximately six miles round-trip everyday to get to school. The Vaden family was joined halfway in their trek by the Long family.

“Some great friendships were formed on those walks to school,” Long reminisced.

The original school was surrounded by two churches, the Church of Christ and the Baptist Church, Tommy Long noted to the court.

For 25 years, the children of northern Hopkins County were educated at the school near CR 4746. In 1941, however, school districts across the county began to consolidate. Just in time for the new term in 1941, the district of North Hopkins was created, and the small communities sent their students to one larger school.

“All these small schools were consolidated,” Long said. “They agreed to close and give up their property and all go to one larger school.”

1941 marked the official, formal creation of the entity known as North Hopkins, which is still around 80 years later.

In 1942, the Church of Christ was moved across the road to make room for the new North Hopkins school, and the building still stands, although it ceased to be a church in approximately 2016. The Baptist Church was moved down SH 154 next to the Birthright Dollar General, and now houses the North Hopkins Baptist Church and Cemetery Association.

“It was such a treat to get into the notes,” Vaden family descendant Kristi Brewer told the court. “When I started looking at the lineage, it was like, ‘wow’.”

The original school building from CR 4746 was moved to the North Caney community, where it served as a school for African American students until school desegregation.

After serving as the North Caney school, the old CR 4746 school moved to SH 19 and SH 71, where it became a personal home and still exists. The teacher’s home at the school became the home Tommy Long grew up in, he said, although it is no longer there.

“This is history we don’t remember much today,” Long lamented. 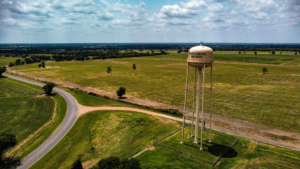