SSMS travels to Houston for robotics


The Sulphur Springs Middle School 7th and 8th grade robotics teams traveled to Houston this weekend to compete in the KISS Institute for Practical Robotics in a Botball competition.

Botball is a competition where students build a robot out of rumba and a metal chassis robot. The rumba robot is called a “create” and the metal chassis is called “wombat.” The students then code both robots to complete a course to earn points.

For this year’s competition it was a science vaccine theme, playing on the COVID-19 pandemic. Each year the theme involves a real-world issue. To help students stay up to date with current events and bring about a practicality of real-world issues into their everyday lives.

The students must code the two robots to accomplish the same goal of collecting the most points per team. How do you collect points? “The teams collect points by coding the robot and building into the code actions such as grab, lift, push, pull, turn and knock over elements” Pierce Dollison explained.

All of the coding is completed before the robots touch the playing surface. Each robot must know what to do and where to go before hand, as there are no drivers in this competition.

While on the “playing board” there are two teams competing against each other to collect the most points. The Sulphur Springs, teams earned points by lifting balls out of a PCR machine, grabbing “Bot guy” and moving him onto an air lock. 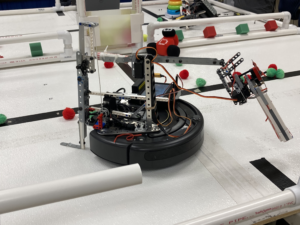 They also lifted rings, such as those colored rings babies play with, off of a stand and put them onto a horizontal electrophoresis. The teams have a total time of two minutes to complete all their coded tasks.

“The kids overcame many difficulties from the beginning. Both teams had servos that controlled their arms that stopped working right before the competition. The 7th graders replaced their arm with a simple build that would still get points. The 8th graders had to replace their whole brain controller before the contest because Servo ports stopped working” stated coach Kelly Shutt.

The 7th grade team won 3rd place overall, as well as the KISS award. The KISS award was awarded to the team for coming up with a simple design to fix their robot to continue in the competition. The 8th grade team won 4th place and both teams won an award for their t-shirt design.

“Both teams overcame the problems. It was a great day overall” said Shutt. The students learned a lot and know what to work on for the next Botball competition.

May is National Motorcycle Safety Awareness Month– share the road!