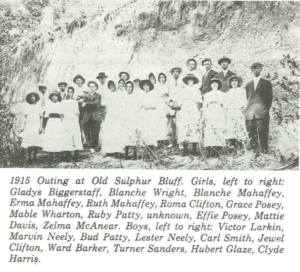 Sulphur Bluff was the first-settled community in our area, and to the pride of Hopkins, remains thriving to this day. Sulphur Bluff has a more than 200-year history which begins with the first white settlers to arrive in South Sulphur Basin and includes celebration, strife and triumph of the human spirit.

For thousands of years, the fertile black earth and sugar sand soils of Hopkins County were home to bear, panthers, catfish, heartwood and hackberry alike. Caddo indigenous people hunted buffalo and gathered pecans and blackberry, moving from one hill to another with the changing seasons. 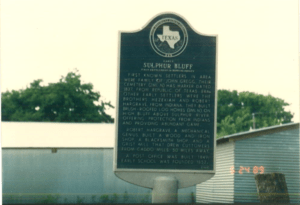 In 1815, a man named Hezekiah Hargrave, his wife Suzanna and their ten children hitched their wagon load from Indiana and headed south to a new land called Texas. When they reached the Red River, they decided to proceed further inland, and hired a indigenous guide by the name of Selon Stout. Stout took the Hargrave family into the South Sulphur basin, where they found a bluff overlooking the South Sulphur River where one could see for miles.

The Hargrave family “found the site ideal” and started to build crude log cabins for more families to join them. Hezekiah’s brother Robert came to join the family as well, and soon, more brush-roofed homes started to appear. In 1837 the Gregg family built the first “official” home in Sulphur Bluff, and the family remains in Hopkins County as of today. In 1843, the new settlers moved the site approximately three miles due to flooding, and the town’s location has not changed since. In 1849 the town got its post office, and in 1852 erected its one-room schoolhouse.

In the first thirty years of Hopkins County’s settlement, the population grew by 182.4%, whereas from 2017 to 2020, Hopkins County experienced .23% growth. The town boasted a cotton gin, a blacksmith, a jail and an oil refinery when crude oil was discovered there in 1882. A masonic later joined in 1899, and the oxen-powered flour mill there drew customers from as far away as Caddo Mills, residents boasted. Methodist, Episcopal and Baptist churches all sprang up before the 20th century rang in, and although they do not inhabit their original buildings, Methodist and Baptist congregations are still in the center of Sulphur Bluff life. 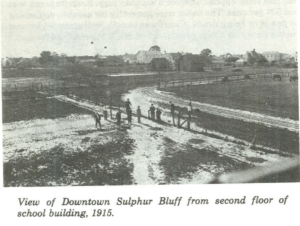 Pioneer men enjoyed activities like hunting and trapping, shooting and fishing in the South Sulphur River’s abundant waters. Firsthand accounts, although they may have been tall tales, told of receding floods that left 15-pound catfish flopping on the banks, ripe for the taking. Pioneer women did sewing and embroidery, tended gardens, did housework and raised children. Pioneer children could wrestle, roll hoops, fly kites and hold foot races until the sky turned to dusk over the bluff.

Though life before the turn of the century was hard work in Sulphur Bluff, everyone pitched in to pick cotton or so they could enjoy the simple pleasures of life such as shooting the anvil for Christmas Eve or savoring a slice of Ribbon Cane Syrup pie.

“Sulphur Bluff was a wooded paradise,” agreed Hopkins County historian P.T. Hare. “It was our secluded kingdom where we glorified life and celebrated faith in humanity.”

History of the Stewart-Birdwell Cemetery