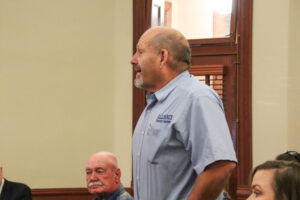 The Hopkins County Commissioners Court heard from citizens regarding specific county roads, solar energy and the Arbala Volunteer Fire Department, among other items of business at their regular Oct. 25 session.

The court opened its session at 9:01 a.m. and after an invocation, welcomed citizen comments.

Pct. 3 citizen Greg Franklin addressed his commissioner Wade Bartley, asking regarding County Road 3542 “When he’s going to start the road up there” and “is he going to seal it up.”

Bartley stated he “is not going to redo the whole road.”

“You ain’t done anything to that road since you’ve been elected, that’s where my comment is at,” Franklin stated.

“There’s going to be an election in three years, so you can run for my job if you want it,” Bartley told him. “No matter what I do to it [CR 3542] it won’t be to your satisfaction.”

“If you paved it up just a little bit, I would be happy,” Franklin concluded.

Dike citizen Michele Barnes then spoke regarding a proposed solar farm in the Dike area.

“Is your goal to line your coffers so full at the expense of those you represent?” Barnes asked the commissioners. “Will you betray your rural neighbors into peasants?”

Barnes accused the commissioners of “making sure there is enough money to take care of Sulphur Springs while rural neighbors turns into a monstrosity.”

Barnes urged the commissioners to consider backups to green energy, and further accused them of being “big government” and “corrupt like Europe.”

Helfferich stated he had donated $700 to the Arbala VFD “to try and help them out.”

However, Helfferich was upset to learn “there was a letter that supposedly I wrote condemning all of y’all– fire marshal, everybody else.”

Helfferich said he did not author such a letter or Facebook post and he “did not appreciate anyone saying [he] did” and apologized for the statement.

The post, which originally appeared on the Facebook Page “Arbala Volunteer Fire Department” has since been deleted.

“No one is suggesting we use only solar energy for our power needs,” Pentak said. “No one is saying that.”

With no further comments, the public comment section was closed at 9:10 a.m.