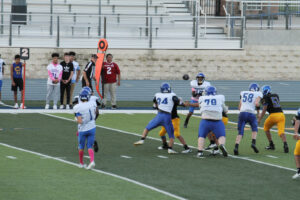 The freshman Wildcat football team put up another “W” in the score book Thursday night against Greenville. They took to the field and gave it their all and proved they wanted to win.

Kaden Mitchell had a throw to 20 for the first touchdown of the night. The extra point kicked by Cristobal Torres was good. Wildcats 7-0.

A Wildcat fumble at the goal line created a return to the end zone, which resulted in a Lion touchdown. The extra point was good, making the score even 7-7.

The boys kept driving forward to the goal line. A play made possible by the defense, who helped push the O-line into the end zone for the touchdown. This was the last play of the first half. The extra point was good ending the half with the Wildcats 14-7.

The third quarter play was back and forth for a bit, until a handoff to Larren Vaughn, resulted in a Wildcat touchdown. The extra point was good, putting the Wildcats ahead 21-7.

Greenville received the second half kickoff and drove the 50 yards scoring on a short run. Greenville had a sneaky two-point conversion to close the score to 21-15 Wildcats.

Malachi Clayton had a fantastic, tight run through traffic, held up by his shirt, breaking multiple tackles then juked to the end zone for a 40-yard touchdown. The two-point conversion was just short. 27-15 Wildcats.

With a Beautiful interception by DeEric Benitez the Wildcats reclaimed the ball. The Wildcats ran out the clock with just seconds remaining in the game the quarterback Wyatt Watson (23) took a knee, affectively ending play. The Freshman Wildcat football team won with the final score of 27-15.

The young Wildcat team had an excellent night running the ball. Solid blocking by the offensive line and effective patience running by Larren Vaughn and Dedrick Rose-Luke.

This photo is from the game vs. Corsicana