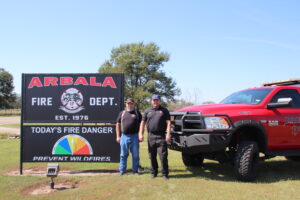 Hopkins County plans to revoke public funding from the Arbala Volunteer Fire Department for one month, per a Oct. 15 decision by the commissioners court.

During the meeting regarding an item titled “A Violation Of Section 16 Of The Arbala Volunteer Fire Department Contract,” county fire marshal Andy Endsley presented he believed Arbala VFD had violated a part of their contract, signed last December, regarding what he termed “freelancing.”

Endsley did not specifically state when the alleged freelancing by Arbala took place, but specified it was an emergency call that Arbala station initially responded to without being toned, and while en route was officially toned by Hopkins County emergency dispatch. Endsley could not be immediately reached to clarify when the incident allegedly occurred.

Arbala station’s chief Brian Fairchild claims that Arbala was “3-4 minutes ahead” of being toned to the scene, and “the other station did not respond.” Front Porch News cannot verify these claims without examining call logs.

The county and Arbala station have butted heads regarding emergency response for over a year. In August and September 2020, Arbala’s chief Brian Fairchild sent a series of emails to the county government detailing how he believed Arbala station was not being properly toned to emergencies.

On Sept. 9, 2020, the county held a meeting with all county VFDs to address the issues Fairchild raised, but representatives from Arbala station did not attend. Instead, the station held their own meeting to review dispatching protocols.

From October 2020 to December 2020, Hopkins County Sheriff Lewis Tatum dictated that Arbala respond to all fire calls, regardless of location, according to emails. However, beginning in December 2020, Arbala’s contract, like all other county VFDs, provided they would not engage in freelancing or “self-dispatching.”

Current dispatch protocols are mandated by the regional government Ark-Tex Council of Governments.

“They [Ark-Tex] check [protocols] yearly,” Endsley said in September 2020. “It’s passed through court and it can’t be changed unless it goes back through court. You can’t do your own freelancing.”

Fairchild currently claims on social media that a $20,000 grant the station received from the Texas Forest Service for personal protective equipment is in danger, as Arbala can’t afford to pay the $2000 grant match without a month’s funding. Representatives from Arbala could not immediately clarify when the matching funds are due.

“Self-dispatching is not allowed and will result in termination of contract. I welcome anyone to read any study; I could not find a study that recommended self-dispatching,” County Judge Robert Newsom noted when the contracts were prepared in December. “It’s dangerous. It causes chaos. It could cost lives. We’re taking a stand.”

But according to Arbala resident Brandi Leber on social media, “I’d rather a department be proactive ‘free lancing’ then to not show up! Who knows….. their response my have [sic] save a life!”