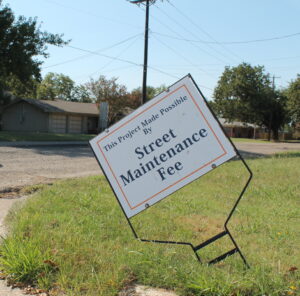 The Street Improvement Program (also known as the summer paving program) has resumed, among other items mentioned during the September monthly city manager’s report.

The Street Improvement Program (which was previously known as the summer paving program) was previously suspended during COVID-19 due to materials shortage. However, it has recently resumed and citizens may be noticing construction work ongoing, city manager Marc Maxwell noted.

Streets slated to be completed by Sept. 30 include some or all of:

All streets except Duckworth have stabilized cement, and were paid for from the street improvement fund.

As of the morning of Sept. 9, paving was completed on Texas and N. Davis streets.

The city’s next large paving project is College Street, Maxwell noted. The council later authorized purchase of equipment for the project at their regular Sept. 7 meeting.

During August, the city also underwent heavy-duty ditching to improve drainage and subsurface drainage of several specific areas, Maxwell said. These include locations known colloquially as:

“We’re making some progress, especially on MLK,” Maxwell said. “The soils get clogged up with a myriad of different subsurface drainage issues, but we’ve done a bunch of cleanup.”

The city has further been snaking the sewer lines for trapped debris and stoppages, including at Oak Avenue at MLK.

“Just imagine what we’ve found with some of these lines being around 75 years,” Maxwell said. “It was so much silt and mud and who-knows-what. We’ve made so much progress.”

Paving will also be taking place at KSLR Sulphur Springs Municipal Airport, with a projected completion date of mid-November, Maxwell said. The $1.9 million expenditure will be paid 90% by a grant from TxDOT. Currently, the project is one third done, he said.

“It’s moving along well, and there’s a few weeks to go on it,” Maxwell said. “We’ll rehab all of the surfaces, build a new ramp, and expand.”

The city council took no action on Maxwell’s report, as none is required.