A&M-Commerce Football starts season as No. 5 in D2Football.Com rankings 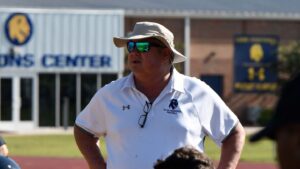 Just four days away from its season opener, the Texas A&M University-Commerce football is ranked No. 5 in the D2Football.com preseason poll, which was released Monday morning.

Under coach David Bailiff, who enters his second season of full competition, the Lions go into this season with 29 student-athletes that have already received their degrees. They also welcome numerous transfers and a talented crop of freshmen.

The Lions went 11-3 in 2019, falling in the regional round of the NCAA playoffs. This year’s team is led by Lone Star Conference Preseason Defensive Player of the Year, Dominique Ramsey.

Two of the first three matchups to start the year come against ranked teams for the Lions, beginning with the season opener against No. 12 Colorado State-Pueblo on Thursday at 7 p.m.

The second game against a ranked opponent to start the year comes against No. 1 West Florida on September 18 at 6 p.m. at Memorial Stadium. Ticket information for the West Florida game as well as all individual and season ticket packages can be found at LionAthletics.com/Tickets.

The game sandwiched between the two team ranked teams comes against LSC foe Midwestern State at Choctaw Stadium in Arlington on September 11 at 6 p.m. Ticket information for that game can be found at LionAthletics.com/Arlington. 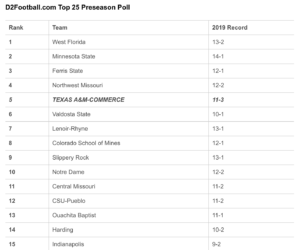