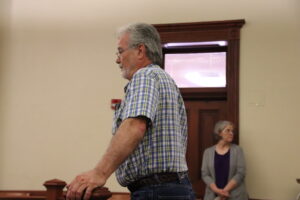 The Hopkins County Commissioners Court discussed roof repair, among other items of business at a special session on August 26.

After opening the meeting at 1:03 p.m., the court opened the floor to citizen comments. Several members of the Dike community were present to give comment [see related story].

The court then moved on to old business, which included a tabled item regarding roof repair to the court annex.

After removing the item from the table, county auditor Shannah Aulsbrook presented that the county had received two bids for the repair: one from Horne construction for $105,277 and one from AltaVista for $77,000.

The county’s Tom Glossup was on hand to answer particulars about roof construction. Commissioner Pct. 3 Wade Bartley inquired about the difference in the two quotes, and the cost of materials.

According to Glossup, the reason for the more expensive Horne quote was due to the fact that it was composed of substrate-bonded  PVC roofing material. The AltaVista roof would not be composed of PVC, which would be out of compliance with factory specifications and industry standards, Glossup noted.

Glossup also noted that Horne construction could start right away, whereas AltaVista would have to delay construction until December. This presents a problem as construction is often halted during the winter months, Glossup said.

“I wouldn’t be surprised if they couldn’t work but half a day,” he said.

Furthermore, roofing materials such as substrate glue must be kept at “55 degrees and rising,” Glossup said, another complication in sometimes-cold winter months.

“I’m all for saving money, but I think we need to go with the higher bid,” Bartley noted.

Aulsbrook specified to the court that the county’s insurance would pay for the cost of repairs.

With no further discussion, the court authorized the bid for Horne Construction.

After additional comments from Dike citizens, the meeting was adjourned at 1:17 p.m.

Possible rain in weekend for Hopkins not likely