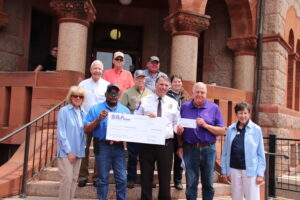 Hopkins County emergency management is the recipient of a grant from the Sabine River Authority for the second time due to their excellence in environmental response, according to a release from the SRA.

During the awarding for both grants, the SRA’s board cited Hopkins County emergency management’s prompt disaster response, specifically their quick mitigation of the October 2019 Turkey Creek oil spill.

The decision to award the grant to Hopkins County, according to board member Cary “Mac” Abney, was unanimous.

“They really saved a lot of problems,” Abney said. “We gave it [the grant] to them [the county] because they’ll know what to do with it.”

According to county marshal Andy Endsley, grant funds will be used to purchase an emergency command trailer and towing vehicle, which he said he hopes Hopkins can use not only at local crises but also to assist area agencies in need.

“Wherever it’s needed, it’ll go,” Endsley said. “Anywhere in the state of Texas or our neighbors, we’ll bring it to them… we’re building this as low-budget but functional. We know functional is better than fancy.”

The trailer will include six mobile radios, a command center for emergency operations, and a generator.

Although Orange County, near Beaumont, was also awarded a grant, no other counties in the northeast Texas region were given the grant so far, the SRBA board noted.

The SRA was created in 1949 as a water conservation and reclamation district. SRA controls, stores, preserves, and distributes the waters of the Sabine River and its tributary system.

The Sabine River Basin covers 21 counties in East Texas, with a population of more than half a million, according to the 2010 US Census.