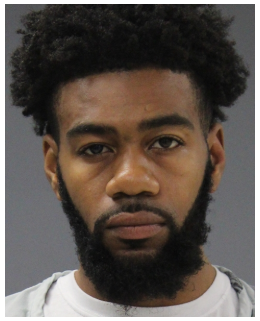 Cumby Police Department arrested a 25 year old Tennessee man that was travelling over 110 mph on I-30 after discovering marijuana, ecstasy, and a pistol in his vehicle.

Hopkins County Sheriff’s Office alerted Cumby PD to a black Dodge Charger at over 95 mph at approximately the 116 mile marker. Cumby PD Sergeant Ray Embro observed the vehicle travelling 114 mph as it passed the 112 mile marker where Sgt. Embro was parked. The vehicle exited at exit 112 and continued on the service road. Sgt. Embryo went and parked his vehicle at the intersection of exit 110 and the service road which caused the vehicle to stop. The officer commanded the driver to park in the parking lot of Blackjack Package Store.

A traffic stop was conducted and the driver was identified as Andrew McKenzie Golston of Memphis, Tennessee. Sgt. Embro detected the odor of marijuana and Golston admitted that illegal contraband was in the vehicle.

A search of the vehicle was conducted and multiple bags of marijuana, multiple small bags containing pills believed to be ecstasy, two bongs, a loaded black Glock pistol along with a large magazine and multiple rounds of ammunition.

Golston was taken to Hopkins County Jail and charged with Unlawful Carry of a Weapon, Possession of Marijuana between 4 ounces and 5 pounds, and Possession of a Controlled Substance between 1 gram and 4 grams.