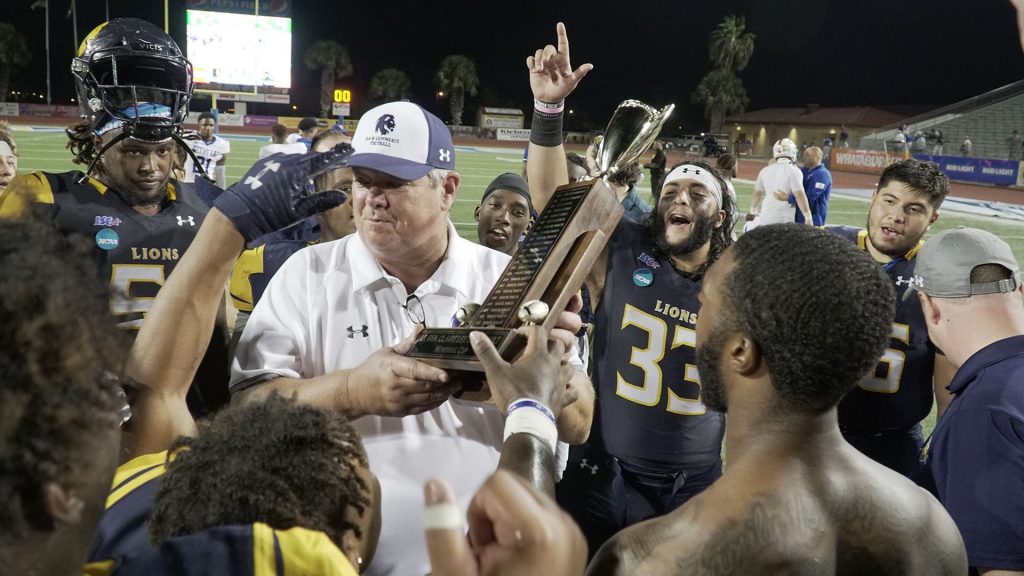 The No. 21 Texas A&M University-Commerce football team defeated Texas A&M-Kingsville 33-6 on Saturday night. After a tightly contested first half, the Lions broke the game open in the second half to get their eighth consecutive win over the Javelinas. With the win, the Lions retain the Chennault Cup for the eighth year in a row, the longest streak by either team in the series.

The win brings the Lions to 4-1 on the season and 2-0 in the Lone Star Conference. A&M-Kingsville falls to 1-4 and 0-3 in conference play.

The Lions return home to face Midwestern State as part of Hall of Fame and Letterwinners’ weekend. The game will be played at 6 p.m. on Saturday at Ernest Hawkins Field at Memorial Stadium and will be televised nationally on ESPN3 as part of the NCAA Division II Football Showcase series. Tickets for the game are available at the box office, online at WeAreLionsTix.com, or by calling (903) 468-8756.

INSIDE THE BOX SCORE
– The Lions totaled 470 yards of total offense in the game, averaging 9.04 yards per play on the night.
– Miklo Smalls (Plano – East Senior) completed 14 of his 20 passes for 222 yards and three scores. He had five passes of at least 15 yards, including two 30+ yard touchdown passes.
– Antonio Lealiiee (Copperas Cove) rushed for a career-high 141 yards on 13 attempts, including a 56-yard touchdown in the third quarter.
– Ryan Stokes (St. Louis, Mo.) led the receiving corps with 71 yards on four receptions, including a 34-yard touchdown catch.
– Darian Owens (Fresno, Calif.) had a 62-yard touchdown catch, while Eric Hebert (Manvel) had a three-yard touchdown grab.
– Jaylon Hodge (Houston – Fort Bend Travis) had a pair of sacks and also forced two fumbles, one of which was recovered by Kader Kohou (Euless – Trinity). LA Dawson (Austin – LBJ) had an interception.
– Alex Shillow (Pflugerville) returned a blocked PAT for a two-point conversion on the block from Darius Williams (Fort Worth – Arlington Heights).

HOW IT HAPPENED
After establishing momentum early in their opening drive, the Lions found that momentum halted as a fumble was forced and recovered by the Javelinas. A&M-Kingsville began driving down the field and got into the red zone. Rushing right around the left end, running back Kris Barnes was met at the line by Hodge, who stripped the ball away, which was recovered by Kohou.

The teams would trade punts before the Lion offense was again in business. Lealiiee busted a run for 51 yards, getting tackled just before he reached the goal line. Smalls then found Hebert for a three-yard score as time expired in the first quarter, giving the Lions a 7-0 lead.

After the Lion defense forced a fourth down, the Javelinas faked a punt and the play was blown up, as Stokes made the tackle behind the line to give the Lions excellent field position. The Lion offense could not punch it in, allowing Jake Viquez (Rockwall) to convert a 24-yard field goal, giving the Lions a 10-0 lead.

The teams traded punts for much of the rest of the half before the Javelinas made one final push in the final possession of the half. After a 34-yard rush put them close, a six-yard catch gave the Javelinas their first points of the game. However, Williams blocked the PAT and Shillow scooped the ball and scored, giving the Lions two points. The score at halftime was 12-6 in favor of A&M-Commerce.

The Lions piled on in the third quarter, amassing 179 yards and three touchdowns in the third frame. After Dawson made an acrobatic interception where he tipped the ball to himself, the Lions were in business. On the third play of the ensuing drive, Lealiiee broke a run up the middle and was untouched for a 56-yard touchdown run, bringing the Lion lead to 19-7.

After the Lion defense forced another Javelina punt, it took just one play for the Lions to score. Smalls found Owens down the seam and he broke an ankle tackle before running all the way for a 62-yard touchdown.

The Lion defense made another stop and the Lions marched down the field again. After a pair of rushes, Smalls showed some nice touch with a 34-yard throw to Stokes, who made the catch in traffic for the touchdown. At the end of the third quarter, A&M-Commerce led 33-6.

The Lion defense continued to suffocate the Javelinas in the fourth quarter, not allowing the Javelinas any to create any doubt in the final result and the Lions hoisted the Chennault Cup for the eighth consecutive season.