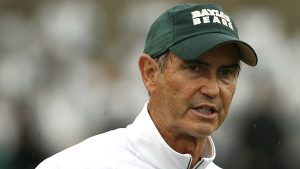 Mt. Vernon ISD announced in a press release today that they have hired former Baylor head football coach Art Briles as the new head football coach at Mt. Vernon High School. Per the Dallas Morning News, Briles served as the head coach at Baylor from 2008 until his firing in May of 2016 amid the sexual assault scandal that plagued the university. Briles amassed a 65-37 record with the Bears, including three straight seasons of 10 wins or more from 2013-2015. Baylor captured its first ever Big 12 title under Briles in 2013 and was the co-champion along with TCU the following year.

Mt. Vernon ISD did not include a summary of the accusations against Briles in their release. In the near future, FrontPorchNewsTexas.com will be releasing a review of the accusations and related reports so that MVISD parents and taxpayers are fully informed regarding the hire.

The full press release is below:

Art Briles will return to the Texas sidelines as Mount Vernon High School’s head football coach this fall. The Mount Vernon ISD Board of Trustees voted to approve a two-year contract with Briles at its May 24th board meeting. Briles comes to Mount Vernon after coaching Guelfi Fierenze, an American football club in Florence, Italy. Prior to that, he was a 20-year veteran of Texas high school football and coached at three Texas universities.

“We are pleased to welcome Coach Briles back home to Texas. He brings with him a wealth of not only football experience but also life experience. He is passionate about investing in the lives of young people and helping them to succeed both on the field and in life. After a thorough due diligence process and several earnest conversations, we believe our students will benefit greatly from his skills and experience,” said Dr. Jason McCullough, Mount Vernon ISD’s Superintendent of Schools.

Briles spoke of his enthusiasm for Texas high school football and returning to the game at Mount Vernon. “High school football is a Texas institution. As a coach, it’s my first love. You’ll make no bigger impact in this world than when you shape the lives of young people—one practice, one game, and one life at a time. I am excited to be coaching at Mount Vernon this fall,” said Briles.

Legendary football coach Grant Teaff, former Executive Director of the American Football Coaches Association and supervisor of the association’s Ethics Committee, offered an unqualified positive recommendation for Briles. “I have known Art Briles for over 30 years as an extremely successful high school coach and through his years as a college coach. I have observed him as a man, husband, father, grandfather, and as a coach, always forthright and stellar,” said Teaff.

Teaff also noted that Briles never incurred a single recruiting infraction during his time at the collegiate level, and previous supervisors and other references also provided strong recommendations. Briles is certified by the Texas Education Association with both teaching and mid-management certifications, and meets the University Interscholastic League’s coaching eligibility standards.

At Mount Vernon ISD, Briles joins a robust athletics department, rich with athletic success and committed to ethics, sportsmanship, and compliance. Every Mount Vernon High School team sport reached the playoffs during the 2018-2019 school year. The football team advanced to the third round of the state playoffs and has reached the playoffs for the past three years. During the 2017-2018 school year, both girls and boys basketball teams reached the state championship, with the girls winning the state title. The district administration includes a Title IX coordinator and regular professional development with Title IX training for staff and administrators.

Reflecting on his move to Mount Vernon, Briles said, “I began my coaching career in the Friday night lights of Texas high school football, and I’m looking forward to returning to my roots. I have learned many lessons during my time as a coach. Some lessons are born out of success and others out of failure. But they all present opportunities to grow, to learn, and to teach, as we strive for excellence both on and off the field.”