Gary Pinkerton began his quest over ten years ago culminating with publication of his book, Trammel’s Trace: The First Road to Texas From the North, in 2016. Trammel’s Trace tells the story of a borderlands smuggler and an important passageway into early Texas.

Trammel’s Trace, named for Nicholas Trammell, was the first route from the United States into the northern boundaries of Spanish Texas. From the Great Bend of the Red River it intersected with El Camino Real de los Tejas in Nacogdoches. By the early nineteenth century, Trammel’s Trace was largely a smuggler’s trail that delivered horses and contraband into the region. It was a microcosm of the migration, lawlessness, and conflict that defined the period.

By the 1820s, as Mexico gained independence from Spain, smuggling declined as Anglo immigration became the primary use of the trail. Familiar names such as Sam Houston, David Crockett, and James Bowie joined throngs of immigrants making passage along Trammel’s Trace. Indeed, Nicholas Trammell opened trading posts on the Red River and near Nacogdoches, hoping to claim a piece of Austin’s new colony. Austin denied Trammell’s entry, however, fearing his poor reputation would usher in a new wave of smuggling and lawlessness. By 1826, Trammell was pushed out of Texas altogether and retreated back to Arkansas Even so, as author Gary L. Pinkerton concludes, Trammell was “more opportunist than outlaw and made the most of disorder.” 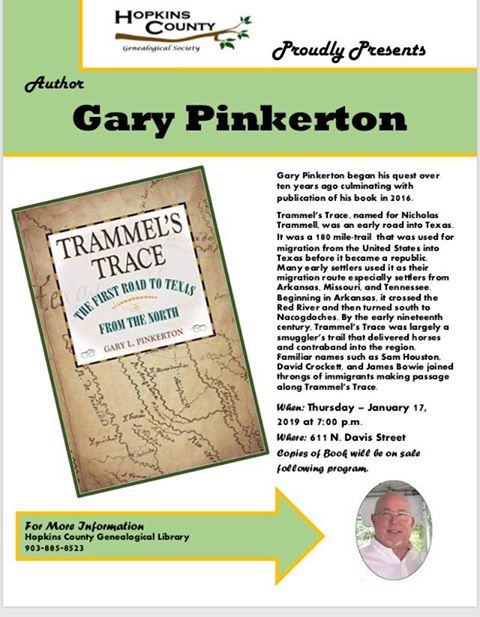 Donation Leads To Creation Of College Of Science And Engineering Makerspace

Daily Devotional from The Way Bible Church for January 7th, 2019