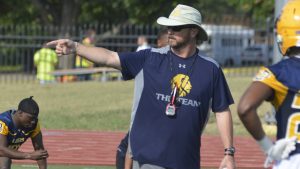 This is the first time the Lions have ever started the season in the No. 1 position. A&M-Commerce received 13 of the 33 first place votes and edged out 2017 national runner-up West Florida for the top position. The Lions had a 14-1 record in the national championship season and carry Division II’s longest active winning streak at 10 games. A total of 43 letterwinners and 14 starters – five on offense and nine on defense – return for the Lions.

A&M-Commerce has been ranked in 40 consecutive AFCA polls, dating back to the 2015 preseason poll. This is A&M-Commerce’s 46th all-time appearance in the AFCA poll since its inception in 2000.

In the polls recognized by Division II as the top rating system, the Lions have been recognized as a nationally ranked team 95 times since joining Division II in 1981. This is the second-ever Division II No. 1 ranking for the Lions, with the other coming after last year’s national championship victory.

All chairback season ticket holders are encouraged to consider philanthropic support of our 424 talented student-athletes with a gift to the Lion Champions Fund. For information on the LCF, please contact Taylor Phelps at (903) 886-5554.