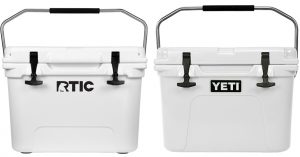 Last month, I went to an Academy sporting goods store to buy a YETI lowball rambler as a gift for a friend. I’d been to Academy several times over the past year and knew right where the store kept its large display of YETI products. When I walked into the store this time, however, the display was completely different. The same display case was now full of tumblers made by Boelter Brands. I found myself walking to the far side of the store past several displays of different tumbler brands before I discovered the new YETI display.

YETI, founded by brothers Ryan and Roy Sieders in 2006, sells high-end coolers and drinkware. The company’s target consumers are avid outdoorsmen and women who need the ice in their coolers to stay frozen on an all-day fishing trip or on a multi-day camping trip. As a company, YETI has successfully transitioned from selling products to selling a lifestyle.  But a large number of consumers want to enjoy the YETI lifestyle at a fraction of the price.

It’s this cheaper version of the YETI lifestyle that creates a problem for the Austin-based company that announced its plans to take the company public last summer. As I saw first-hand on my shopping excursion, YETI faces competition from a growing number of companies that are looking to get a piece of the outdoor cooler and drinkware market. YETI is aware of the threat that these copycats pose to its business. In 2015, prior to announcing its plans for an IPO (Initial Public Offering), YETI filed lawsuits against Wal-Mart, Polar Pad, and RTIC for patent and trademark infringement. When YETI filed its IPO paperwork last July, it had 26 approved patents and another 313 patents pending with the USPTO. In the lawsuits, YETI alleged that these other companies were imitating YETI products in a way that violated the company’s intellectual property rights.

Earlier this month, YETI settled its lawsuit with RTIC, perhaps its largest competitor. While the details of the settlement agreement remain confidential, the settlement appears to be a big win for YETI. RTIC has agreed to stop all sales of the products subject to the lawsuit by May 1. YETI sued over RTIC’s designs of hard-sided coolers, soft-sided coolers, and drink-ware. RTIC has redesigned all of these products in a way that doesn’t copy YETI’s products. This means there will be one less copycat of YETI products when the company becomes publicly traded. In addition, RTIC has agreed to pay financial compensation to YETI. Although RTIC hasn’t admitted to any wrongdoing, the financial payment is likely to compensate YETI for lost sales as a result of RTIC’s infringing products.

The settlement is a victory for consumers as well. When companies simply imitate one another’s products, innovation ceases and the products don’t improve. Intellectual property law promotes competition among businesses. As competition increases so does innovation leading to new and better products for consumers. RTIC has already released new designs for its products. Hopefully, the competition between YETI and RTIC will result in great new coolers and drink-ware for consumers. There’s a more immediate benefit to consumers as well. For those looking for a YETI-type product at a cheaper price, RTIC is offering discounts on the products it is discontinuing. RTIC won’t be making any more of these infringing products so the sale is only while supplies last between now and May 1.