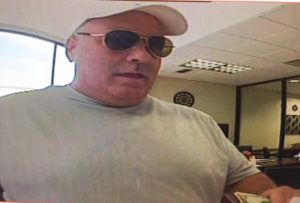 The FBI has captured the serial bank robber dubbed the “Barrel Chested Bandit,” who has confessed to eleven bank robberies or attempted bank robberies across Texas, Arizona and New Mexico between August 24, 2016 and February 4, 2017. The FBI was offering a reward of up to $10,000 for information leading to the arrest and conviction of this individual.

It’s reported he admitted to 11 robberies total including these 8:

The “Barrel Chested Bandit” was described as a white male in his mid-40s to early 50s, 5’6” – 5’10” tall, approximately 250 pounds, with a large build, light complexion and gray hair. He wore a baseball cap in all of the robberies and sunglasses in six of the eight.

In each robbery, the subject produced a small frame handgun, ordered the teller to give him money, and exited on foot. The subject made off with an undisclosed amount of money.