Roses: their care and upkeep by Mario Villarino 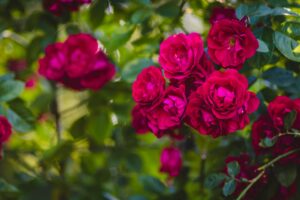 Earlier on the week I got a phone call related to pruning, and particularly pruning of roses. As you are probably aware, the Hopkins County Extension Office promoted the cultivation of earth-kind roses years back and some of them are now mature and thriving. Annual pruning is an important part of rose culture.

According to Texas A&M AgriLife Horticulturist in east Texas, mid-February marks the beginning of the best time to prune roses in the Tyler area. The only exception to this practice would be with the pillar or climbing roses that bloom on last year’s growth and therefore should be pruned after the spring bloom.

But the hybrid teas, grandifloras, floribundas, miniatures and shrub roses should all be pruned at this time. Rose bushes have grown for hundreds of years without such care. The answer is “quality of life,” not “requirement for survival.” Spring pruning improves the following plant characteristics:

For east Texas, the right time for spring pruning is mid-February. This is often remembered as being associated with Valentine’s Day.

According to the International Society of Arboriculture (ISA) proper pruning is essential in developing a tree with a strong structure and desirable form. Trees that receive the appropriate pruning measures while they are young will require little corrective pruning when they mature. Keep these few simple principles in mind before pruning a tree:

Each cut has the potential to change the growth of the tree. Always have a purpose in mind before making a cut.
Proper technique is essential. Poor pruning can cause damage that lasts for the life of the tree. Learn where and how to make the cuts before picking up the pruning shears.

Trees do not heal the way people do. When a tree is wounded, it must grow over and compartmentalize the wound. As a result, the wound is contained within the tree forever.

Small cuts do less damage to the tree than large cuts. For that reason, proper pruning (training) of young trees is critical. Waiting to prune a tree until it is mature can create the need for large cuts that the tree cannot easily close.

Where you make a pruning cut is critical to a tree’s response in growth and wound closure. Make pruning cuts just outside the branch collar. Because the branch collar contains trunk or parent branch tissues, the tree will be damaged unnecessarily if you remove or damage it. In fact, if the cut is large, the tree may suffer permanent internal decay from an improper pruning cut.

If a permanent branch is to be shortened, cut it back to a lateral branch or bud. Internodal cuts, or cuts made between buds or branches, may lead to stem decay, sprout production, and misdirected growth.

In general, the best time to prune most plants is during late winter or early spring before growth begins. There are exceptions to this rule, and they will be noted under the discussion of the specific plant groups. The least desirable time is immediately after new growth develops in the spring. A great amount of food stored in roots and stems is used in developing new growth. This food should be replaced by new foliage before it is removed; if not, considerable dwarfing of the plant may occur. This is a common problem encountered in pruning.

For more information on this or any other Agricultural topic please contact the Hopkins County Extension Office at 903-885-3443 or email m-villarino@tamu.edu.