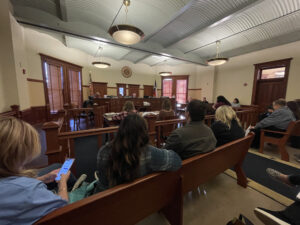 The Hopkins County commissioners court discussed paper ballots and insurance at their first regular meeting of 2022.

After an invocation by fire marshal Andy Endsley, the court convened at 9:00 a.m.

County Judge Robert Newsom welcomed the Hopkins County adult leadership class to the citizen gallery. He introduced members of the court by name to the group and described the capacity in which they serve.

The court considered requests for utility placements by Farmers Electric Co-Operative at the following locations: 1060 feet northeast of Farm Road 275 South and 980 feet north Of County Road 1153. Newsom explained to those assembled that these were the location of new home construction. The court unanimously approved the requests.

The court considered a request from employees at the office of the tax assessor-collector to adjust New Year’s holidays, to run from December 31 to January 3. Newsom stated he was informed by assessor-collector Debbie Pogue-Mitchell that many in the county pay their yearly taxes on December 31.

“We just have to declare it a holiday, otherwise we [the county] have to pay them [tax staff] holiday pay,” county auditor Shannah Aulsbrook noted.

With no further discussion, the court passed the item unanimously.

The court entered into the record a submission of state-required paperwork regarding racial profiling from Constable Pct. I Norman Colyer. The report was not read aloud.

The court then discussed establishing a reinvestment zone in the Saltillo community between Hopkins County and solar energy company BT Solterra.

The court also unanimously approved a 381 agreement for BT Solterrra, the same as they had done in November 2021.

“It’s just an incentive for them to come here,” Newsom noted. Newsom stated he believed BT Solterra would bring from $100 to $140 million to the county in terms of investment.

Under budget and line item transfers, Aulsbrook submitted an insurance payout for Pct. 3’s backhoe in the amount of $22,426.91 as it was “ran into in the middle of the night.” Aulsbrook stated she would deposit the amount into the Pct. 3 repair fund so the backhoe could be repaired. The court unanimously approved the insurance deposit.

The court did not have grants, donations or contracts.

The court did not have any personnel matters.

Under reimbursements, the court reviewed the terms and conditions of auditable voting machines.

“We invested a lot of money in electronic voting machines… and everybody loved them,” Newsom said. “But the legislature voted we have to go back to paper ballots.”

Newsom said in total, state law necessitated the county spend $113,000 on supplies to bring the county’s current machines in compliance. In future elections, citizens will vote on a paper ballot that is read by a machine, Newsom said.

“It’s almost like we’re going back in time,” Newsom objected. “The paper was always good, but it was just slow.” However, on a positive note, he said, “it’s interesting to watch history.”

Newsom pointed out that most of the funds to switch the machines will come from the state of Texas, “thank goodness for the taxpayer of Hopkins County.”

There were no resolutions or proclamations.

With no further business, court was adjourned at 9:20 a.m.

By Taylor Nye. Abbi Beggs and Logan Vaughan contributed to this report.

Roses: their care and upkeep by Mario Villarino