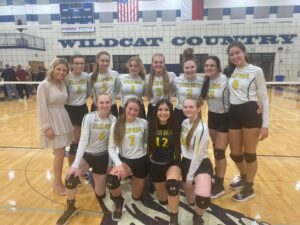 
The Miller Grove Lady Hornets traveled to Paris Tuesday to face Avery in the Regional Quarterfinals round of the playoffs. Miller Grove was coming off a huge win in the Area round, when they beat Union Hill in straight sets by scores of 25-8, 25-6 and 25-7.

The opening set established the tone of the game, proving how close of a match it would be throughout. It took extra time but the Lady Hornets were able to hold on, defeating Avery 27-25 in the first set.

The second set was very close as well, but this time the Lady Hornets didn’t have the upper hand. While they were able to stay in it the entire way through, Miller Grove fell 25-21, tying things up at one set apiece.

Hoping to not fall behind in the match, the Lady Hornets were able to pick themselves up and continue their strong play in the third set. Miller Grove controlled things the entire way and won by the largest margin of the night, almost taking the set by double-digits, as they won 25-16.

With a chance to put the game away in the fourth set, the Lady Hornets were hoping for a similar outcome but were unable to do so. Avery put up a strong fight and forced a fifth and deciding set, as the won 25-20.

With the game and their season on the line, the Lady Hornets played strong in the final set. Things remained close but Miller Grove was able to get the job done, taking the set 15-11 and advancing to the regional tournament.

Lainy Burnett led the offensive attack for the Lady Hornets, having a really strong outing. Burnett finished with a game-high 23 kills, as well as four digs and four blocks.

Also finishing in double-digits was Jaci Roberson who was a very strong second option for the Lady Hornets attack. Roberson had 14 kills, to go along with one block, one ace and one dig.

Setting things up was Kayti Brignon who has had a very strong season as Miller Grove’s setter. Brignon had an impressive 34-assist outing, as well as a pair of kills and a dig.

Controlling the net for Miller Grove was Ava Sotelo who had a very strong defensive showing. Sotelo had nine blocks and even added a kill of her own.

Other notables for the Lady Hornets were Anna Culberson who had four digs, Jamilyn Hensley who had two digs and an assist, and Arean Wood who had one kill.

Further updates on Miller Grove’s performance in the regional tournament will be posted on Front Porch News.