The freshman Wildcats football team had a decisive victory on Thursday night at home against Royce City.  The Wildcats came to play and proved that they were up for the task set before them on the field.  A little give and take at the start of the game between these two teams ended with the Wildcats coming out on top.

Royce City did make the first touchdown of the game with a throw to the end zone. The extra point was good making the score 0-7 Royce City.

The Wildcats were determined to not be left behind.  They made a successful screen pass to Dedrick Rose-Luke (3) for the touchdown. The extra point was kicked by Cristobal Torres (9),  Tying the game at 7-7. 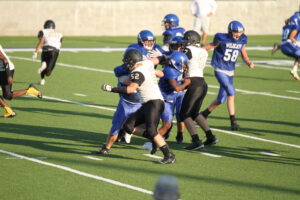 The turning point in the game was made when a long throw towards the end of the first quarter by Royce City, was interrupted by Quinton Zirretta (8) who forced a fumble at the goal line, and recovered the ball. This started a Wildcat drive.  This turnover proved to be too difficult for the Bulldogs to come back from.  The Wildcats were able to hold off Royce City and make completions in the end zone.

The build up to the next touchdown started with a great throw by Kaden Mitchell (1) to Skylar Lewis (16) who brought the ball to the new line of scrimmage at the goal line. A run up the middle by Dedrick Rose-Luke (3) for the Wildcat touchdown. Christobal Torres (9) had another great kick for the extra point, bringing the score 14-7 Wildcats.

The Wildcat coaches pulled out a trick play when Kaden Mitchell (1) lateraled to Dedrick Rose-Luke (3) who has a long throw to Skylar Lewis (16) for the touchdown. The extra point by Christobal Torres (9) was good bringing the score to 21-7 Wildcats. 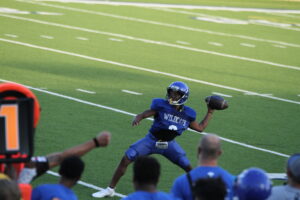 After the half the Wildcats started with the ball.  The half gets moving when Kaden Mitchell (1) threw a long pass to Skylar Lewis (16) who made a long run in for a touchdown. The kick by Christobal Torres (9) was good again for the extra point, the score 28-7 Wildcats.

Midway into the third quarter Royce City makes it to the goal line. On the second run the quarterback managed to carry the ball across the line. The extra point was good, the score was now 28-14 Wildcats.

The Freshman Wildcats mange to hold off Royce City for the remainder of the third quarter and late into the fourth quarter. Dedrick Rose-Luke (3) ran the ball in for a touchdown. The extra point shot to the side and was no good. That put the score 34-14 Wildcats.

Only seconds remained on the clock and the scrimmage line was deep into the end zone for Royce City.  They made one last play, like the Wildcat played earlier with “two” quarterbacks, which resulted in a garbage time touchdown for Royce City. They kicked for the extra point, and it was good. The final score 34-21 Wildcats.

It was great to see a winning Wildcat football game tonight.  Each of the boys left it all out on the field.  Torres did an amazing job with the teams kicks and we hope to see more of his action in the upcoming games.

The freshman team takes on Corsicana next week at Corsicana. 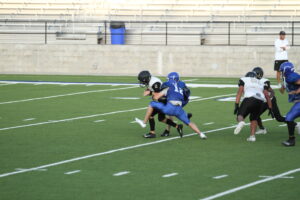