Texas House Democrats flee the state in move that could block voting restrictions bill, bring Legislature to a halt 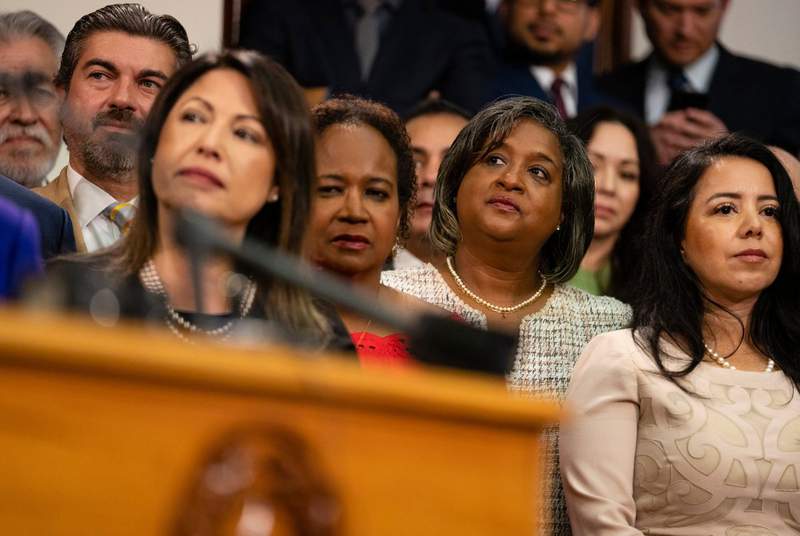 Democrats in the Texas House of Representatives left the state Monday afternoon en route to Washington, D.C., in a bid to again deny Republicans the quorum needed to pass new voting restrictions with 26 days left in a special legislative session called largely for that purpose.

Upping the ante in both the legislative fight at home and the national debate over voting rights, most House Democrats boarded two planes out of Austin headed for the U.S. capital without a set return date. At least 51 of the 67 Democratic representatives — the number needed to break quorum — were in the process of leaving Monday afternoon, most arriving at Austin-Bergstrom International Airport Monday to board chartered flights that departed around 3:10 p.m.

The House is set to reconvene Tuesday morning, but the absent Democrats would mean there will not be enough members present to conduct business under House rules.

“Today, Texas House Democrats stand united in our decision to break quorum and refuse to let the Republican-led legislature force through dangerous legislation that would trample on Texans’ freedom to vote,” Democratic leaders said in a joint statement released Monday.

With the national political spotlight on Texas’ efforts to further restrict voting, the Democratic exodus offers them a platform to continue pleading with Congress to act on restoring federal protections for voters of color. In Texas, the decamping will mark a more aggressive stance by Democrats to block Republican legislation further tightening the state’s voting rules as the GOP works against thinning statewide margins of victory.

Ultimately, Democrats lack the votes to keep the Republican-controlled Legislature from passing new voting restrictions, along with the other conservative priorities on Gov. Greg Abbott’s 11-item agenda for the special session.

Some Democrats hope their absence will give them leverage to force good-faith negotiations with Republicans, who they say have largely shut them out of negotiations over the voting bill. Both chambers advanced their legislation out of committees on party-line votes after overnight hearings, passing out the bills early Sunday morning after hearing hours of testimony mostly against the proposals and just a few days after making their revived proposals public. The bills were expected to hit the House and Senate floors for votes this week.

The House and Senate proposals resemble failed legislation, known as Senate Bill 7, from the spring regular legislation session — the demise of which Texas Democrats used last month to make their pitch on Capitol Hill for action on voting rights.

On Monday, Democrats indicated they were renewing their calls for Congress to pass far-reaching federal legislation that would preempt significant portions of the Texas bills and reinstate federal oversight of elections in states with troubling records.

“We are now taking the fight to our nation’s Capitol,” the Democrats said in their statement. “We are living on borrowed time in Texas.”

The Democrats convened at a local plumbers union building and boarded a bus that transported them to a private airport terminal. They arrived at Austin-Bergstrom International Airport shortly after 2:30 p.m., driving straight onto the tarmac.

Lawmakers did not speak with the media before they left. Terminal staff kept reporters off the premises and on the street outside. By 3 p.m., several supporters of the legislators were gathered outside the terminal, holding signs that said, “Let my people vote,” and, “Thank you for fighting voter suppression.”

Even if Democratic lawmakers stay out of state for the next few weeks, the governor could continue to call 30-day sessions or add voting restrictions to the agenda when the Legislature takes on the redrawing of the state’s political maps later this summer.

Monday’s mass departure follows a Democratic walkout in May that kept Republicans from passing their priority voting bill at the end of the regular legislative session. For weeks, Democrats had indicated that skipping town during the special session remained an option as Republicans prepared for a second attempt at tightening the state’s voting laws.

House Speaker Dade Phelan, R-Beaumont, said in a statement later Monday that the chamber “will use every available resource under the Texas Constitution and the unanimously-passed House rules to secure a quorum…”

Gov. Greg Abbott, meanwhile, panned Democrats over the move, saying it “inflicts harm on the very Texans who elected them to serve.”

“As they fly across the country on cushy private planes, they leave undone issues that can help their districts and our state,” Abbott said in a statement Monday afternoon. “The Democrats must put aside partisan political games and get back to the job they were elected to do.”

According to House rules adopted at the beginning of the regular session, two-thirds of the 150-member chamber must be present to conduct business. When the House is in session, legislators can vote to lock chamber doors to prevent colleagues from leaving and can order law enforcement to track down lawmakers who have already fled.

If a quorum is not present when the House convenes Tuesday, any House member can move to make what’s known as a call of the House to “to secure and maintain a quorum” to consider a certain piece of legislation, resolution or motion, under chamber rules. That motion must be seconded by 15 members and ordered by a majority vote. If that happens, the missing Democrats will become legislative fugitives.

“All absentees for whom no sufficient excuse is made may, by order of a majority of those present, be sent for and arrested, wherever they may be found, by the sergeant-at-arms or an officer appointed by the sergeant-at-arms for that purpose, and their attendance shall be secured and retained,” the House rules state. “The house shall determine on what conditions they shall be discharged.”

It’s unclear, though, what options Phelan may have to compel Democrats to return to the Legislature if they’re out of state.

The House voting bill as passed by committee over the weekend would rein in local voting initiatives like drive-thru and 24-hour voting, further tighten the rules for voting by mail, bolster access for partisan poll watchers and ban local election officials from proactively sending out applications to request mail-in ballots.

The Democrats’ departure also calls into question other items included on Abbott’s special session agenda, including legislation to provide funding for the Legislature. Last month, Abbott vetoed a section of the state budget that funds the Legislature for the two-year budget cycle that starts Sept. 1. He did so in retribution for Democrats’ walkout in May. If the Legislature does not pass a supplemental budget before the new cycle begins, more than 2,100 legislative staffers and individuals working at legislative agencies could be impacted.