ERCOT asks Texans to conserve power, but says outages not expected as it nears emergency conditions 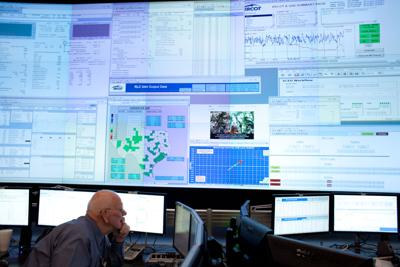 Texas’ main power grid struggled to keep up with the demand for electricity Tuesday, prompting the operator to ask Texans to conserve power nearly two months after catastrophic power outages left millions without electricity for days.

The Electric Reliability Council of Texas said it does not expect customer power outages like those caused in February’s winter storm, one of the most deadly and expensive disasters in the state’s history.

Texans were asked to conserve power from Tuesday afternoon through the evening. By late Tuesday, the grid was again operating in normal conditions, according to ERCOT data.

Tuesday’s tight conditions for the grid were caused by a high number of power plants being offline for maintenance — some due to repairs from the February winter storm — combined with higher demand than ERCOT predicted, Woody Rickerson, an ERCOT vice president, told reporters Tuesday evening.

ERCOT officials said a cold front stalled, leaving parts of the state hotter than the grid operator planned. With hotter temperatures, energy use increased as air conditioners operated longer than anticipated for the day.

Data from ERCOT showed that demand for energy on the grid was near 49,000 megawatts at 5 p.m., when the available supply to the grid was about 50,000 megawatts. That’s much less than the peak demand it neared during February, about 72,000 megawatts, when energy use surpassed record levels as Texans tried to stay warm during a severe winter storm.

Approximately 32,000 megawatts of generation was offline due to maintenance on Tuesday, Rickerson told reporters Tuesday evening, enough to power 6.4 million Texas homes on a hot day.

“It borders the edge of reasonable,” Beth Garza, director of ERCOT’s independent watchdog from 2014 to 2019, told the Tribune.

The amount offline was more than 50% higher than what the grid operator expected for power plant outages due to spring maintenance this year, according to ERCOT’s seasonal assessment of power resources.

Maintenance outages are very common during the spring and fall as power plants prepare for the extreme heat in the summer or extreme cold in the winter. Those outages are higher than usual right now, a spokesperson told the Tribune early Tuesday, due to additional repairs necessary from the February winter storm.

Also on Tuesday, there was lower solar generation available to the grid than ERCOT projected, Rickerson said, due to cloudy weather.

“We’re seeing today probably 3,000 megawatts less solar generation than what we would normally see on a clear day,” he said.

The supply and demand for power must remain balanced on electricity grids at all times. Asking Texans to conserve power is among the first steps the grid operator takes in order to bring it back in balance.

As the electric power sector’s maintenance season continues into May, Rickerson said, “There is a possibility that we could have the same phone call again, some afternoon, in the next three or four weeks,” he said.