Home Local News Texans don’t have to prove they’re eligible for the COVID-19 vaccine, and some are jumping the line. Here’s why.
Local NewsTexas News 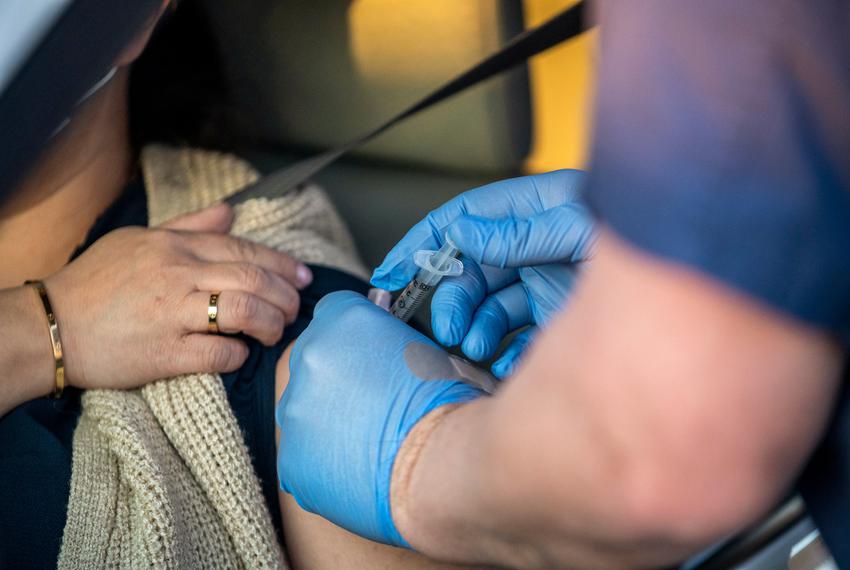 When a new mom in Austin found out that COVID-19 vaccine appointments were open in Killeen, she sent her healthy, 28-year-old husband and her 65-year-old mother to get their injections.

Both were vaccinated, despite only one of them being eligible under the priority groups outlined by Texas state health officials.

“I mostly sent them to get vaccines to protect me and for our newborn baby’s sake since [my husband] tends to see more friends,” said the 37-year-old woman, who requested anonymity for fear of public retribution.

Tensions over so-called “line jumpers” are high as Texas scrambles to vaccinate the majority of its 29 million residents, reduce deaths and hospitalizations, and stem the spread of the virus among highly vulnerable communities of color.

Current state guidelines require recipients to be 65 or older, a front line health care worker, employed as a teacher or child care worker or medically vulnerable and older than 15. About 4.3 million people in Texas — or roughly 14% of the state’s population — have gotten at least one dose. Between 10 and 13 million people are eligible for the vaccine under Texas guidelines, said Lara Anton, a spokesperson for the Texas Department of State Health Services.

Anton said that if a provider has access to a recipient’s medical records — for example if the person is an existing patient — those may be used to verify a person’s medical eligibility, but providers are not allowed, under state health guidelines, to require recipients to prove a medical condition.

She added that the state does not want to make it more difficult for people to get the shot by requiring them to bring medical records.

“We don’t want to create barriers that would prevent people from getting vaccinated, and every person who is vaccinated slows the spread of the disease and relieves pressure on the hospital system,” Anton said.

While many providers say they believe, based on anecdotal evidence and state data, that most people who are getting the vaccine are eligible, they acknowledge that it’s difficult to confirm eligibility and enforce requirements beyond a person’s age when there are no medical records to check. Many qualifying conditions, such as diabetes or sickle cell disease, aren’t easily confirmed without them.

The result is that providers are largely operating on the honor system. And from backlash over an older Texas state senator getting his vaccine before his age group became eligible to reports of young, seemingly healthy college students lining up to get shots on campus with little more than a student ID, anecdotal evidence shows that not everyone follows it.

“The ethical thing to do is to wait until it’s your turn, even though I do know that it’s frustrating for a lot of folks,” said Allison Winnike, president and CEO of The Immunization Partnership, a statewide nonprofit focused on eradicating vaccine-preventable diseases.

Quantifying the incidents and impact of line jumpers is impossible, officials say. The state also does not keep track of how many people are on waiting lists for the vaccine, because Texas has more than 1,500 of vaccine providers, each has a different system and some people are on several waiting lists simultaneously.

Anton said providers have not reported having problems with ineligible people overtaking the priority groups, but if a provider does indicate that they plan to do so as a matter of practice, “we reach out to them immediately and explain that they should not be vaccinating people outside of those groups.”

Once Texas broadens eligibility requirements to include more people and likely essential workers, a move expected later this month, the issue of giving shots to people who aren’t qualified will have less of an impact, Winnike said.

“As you continue to open it up, there are more opportunities for line jumping, but less reason to,” Winnike said. “At some point it will almost be irrelevant.”

Headline-grabbing stories in Texas and across the nation tell of the battle between the qualifieds and the unqualifieds.

States like New York are struggling to vaccinate people of color while white residents line up at vaccination hubs aimed at communities of color. Reports of people crossing state and county lines to get vaccinated triggered clamp-downs in Florida. Social media is rife with personal stories of people either getting the shot out of turn or angrily complaining about seemingly ineligible people getting vaccines while prioritized people sit on waiting lists.

Half of all Texans age 65 and older have received at least one dose, which accounts for nearly 2 million people and almost half of all doses administered in Texas, according to DSHS numbers. Older people, who comprise about 13% of Texas’ population, are the most likely to be hospitalized and die from the virus.

In Austin, more than half a million people meet the eligibility requirements, and about 200,000 are pre-registered through the Austin Public Health system and still waiting, an APH spokesperson said in an emailed statement. Some 167,000 people have gotten at least one dose at Travis County locations, according to state health officials.

Line-jumping is “an unfortunate reality for many providers” but “overall, we are trying to achieve herd immunity and a shot in an arm is good for the entire community,” the spokesperson said.

“We want to prioritize our most vulnerable who can suffer the most from the virus,” the spokesperson added. “Instead of jumping the line, help a senior sign up for the vaccine.”

Registration glitches have happened in several states, including Texas, that allowed thousands of ineligible people to bypass priority guidelines and register for appointments or show up at large vaccination events on a walk-in basis to get a shot they weren’t yet eligible for, according to reports.

At the University of Texas at Austin in late February, an online registration link for appointments through UT Health Austin was “inappropriately shared” and resulted in people believing erroneously that they qualified and signing up for a shot, officials said. Officials later canceled most of those appointments.

“Everyone’s fighting through the same bugs in the system,” said Jen Stratton, director of communications for Family Hospital Systems in Williamson County, which partners with the county to run a vaccination hub. “I don’t know of a single hub in this country that had no problem at all with people getting links that they maybe shouldn’t have.

Faced with trying to vaccinate against a virus that has killed nearly 45,000 people in Texas in the past year, providers are juggling the cost of vaccinating some who aren’t qualified against the benefit of getting as many Texans vaccinated as possible.

In some cases, shots are administered to ineligible people because providers don’t want to waste vaccine doses when eligible people cancel or miss their appointments or because not enough eligible people show up during a vaccination drive. Both the Pfizer and Moderna vaccines must be used within a certain period of time after their seal is broken.

When that happens, providers have to choose between vaccinating someone who isn’t in a priority group or throwing away a precious dose of the COVID-19 vaccine, which is already in short supply. Most appear to be following recommendations of state and national health officials to administer the shot to those outside the eligibility guidelines if it keeps doses from being wasted — even as providers face criticism for vaccinating people outside of the eligibility guidelines.

The 37-year-old Austin mother, who feared for her newborn if she or the baby caught COVID-19, acknowledged that the family’s decision to vaccinate her healthy young husband is “an ethically gray area” that could bring backlash from family members or the public if they shared it on social media.

“But here’s what I know now,” she said. “I know if I get sick, he [my husband] or my mom could take care of my baby in the same household. … I didn’t feel great about the decision. But I was like, I’m gonna make it anyways because your motherly instincts kick in and you’re just like, ‘Nope, I’ll do anything to protect my baby.’”