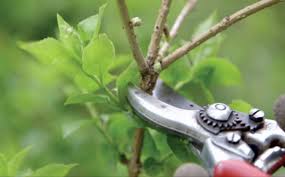 Pruning should follow a definite plan. Consider the reason or purpose before cutting begins.

By making the pruning cuts in a certain order, the total number of cuts is reduced greatly. The skilled pruner first removes all dead, broken, diseased or problem limbs by cutting them at the point of origin or back to a strong lateral branch or shoot. Often, removing this material opens the canopy sufficiently so that no further pruning is necessary.

The next step in pruning is to make any training cuts needed. By cutting back lateral branches, the tree or shrub is trained to develop a desired shape, to fill in an open area caused by storm or wind damage or to keep it in bounds to fit a given area. To properly train a plant, one should understand its natural growth habit. Always avoid destroying the natural shape or growth habit when pruning unless maintaining a close watch over the plant, for after a period of time it attempts to assume the more natural growth habit. Make additional corrective prunings to eliminate weak or narrow crotches and remove the less desirable central leader where double leaders occur. After these cuts have been made, stand back and take a look at your work. Are there any other corrective pruning cuts necessary?

If the amount of wood removed is considerable, further pruning may need to be delayed a year or so. Remove water sprouts unless needed to fill a hole or to shade a large limb until other branches develop. Pruning can actually be done at any time of the year; however, recommended times vary with different plants. Contrary to popular belief, pruning at the wrong time of the year does not kill plants, but continual improper pruning results in damaged or weakened plants. Do not prune at the convenience of the pruner, but rather when it results in the least damage to the plant. There is little chance of damaging the plant if this rule is followed. In general, the best time to prune most plants is during late winter or early spring before growth begins. There are exceptions to this rule, and they will be noted under the discussion of the specific plant groups. The least desirable time is immediately after new growth develops in the spring. A great amount of food stored in roots and stems is used in developing new growth. This food should be replaced by new foliage before it is removed; if not, considerable dwarfing of the plant may occur. This is a common problem encountered in pruning. It also is advisable to limit the amount of pruning done late in summer as new growth may be encouraged on some plants. This growth may not have sufficient time to harden off before cold weather arrives resulting in cold damage or winter kill. Prune plants damaged by storms or vandalism or ones with dead limbs as soon as possible to avoid additional insect and disease problems that may develop. For more information on this or any other agricultural topic please contact the Hopkins County Extension office at 903-885-3443 or email me at m-villarino@tamu.edu.