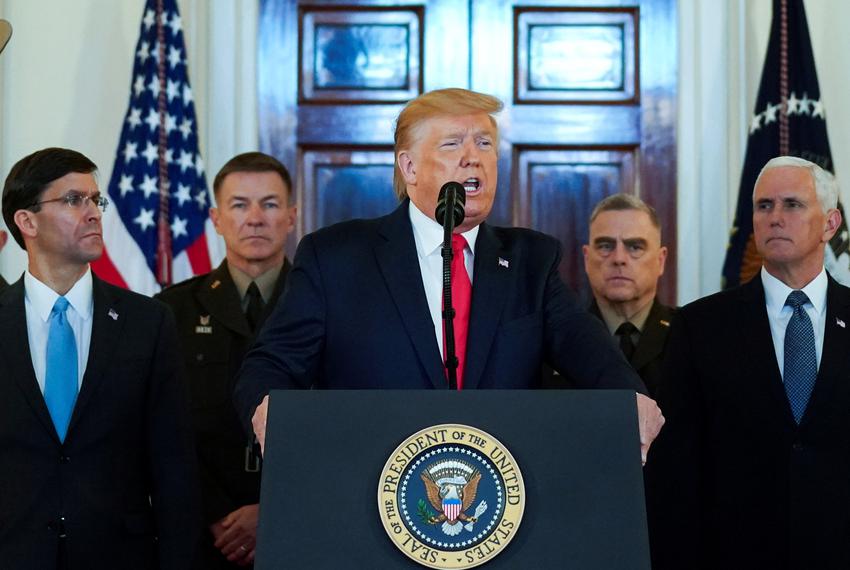 President Trump on Tuesday night asked Congress to amend the nearly $900 billion stimulus and spending bill passed by the Senate just one day before, describing the legislation as “a disgrace” and suggesting he would not immediately sign off on aid for millions of Americans.

In a video posted to Twitter, Trump called on Congress to increase the “ridiculously low” $600 stimulus checks to $2,000 and outlined a list of provisions in the final legislation that he described as “wasteful spending and much more.” He did not mention that the $600 stimulus check idea came from his treasury secretary, Steven Mnuchin.

“I am also asking Congress to immediately get rid of the wasteful and unnecessary items from this legislation, and to send me a suitable bill, or else the next administration will have to deliver a COVID relief package, and maybe that administration will be me,” Trump said.

The video landed like a sonic boom in Washington. His own aides were stunned. Congressional aides were stunned. And the implications for what happens next could be severe. If he refuses to sign the bill, the government will shut down on Dec. 29. The $900 billion in emergency economic aid will be frozen, and the race for the two Senate seats in Georgia could also be upended.

House Speaker Nancy Pelosi, D-Calif., quickly responded to the Twitter post by saying congressional Democrats would enthusiastically return to the Capitol to approve the $2,000 stimulus checks.

“Republicans repeatedly refused to say what amount the President wanted for direct checks,” she posted on Twitter Tuesday night after Trump’s message. “At last, the President has agreed to $2,000 — Democrats are ready to bring this to the Floor this week by unanimous consent. Let’s do it!”

Senate Republicans had been the most resistant to the larger checks, and they control the Senate.

The 5,593-page bipartisan bill was introduced Monday afternoon and then passed the House and Senate later in the evening. It passed Congress with broad bipartisan support, clearing the Senate by a 92-6 margin. Republicans had insisted on keeping the economic relief portion at less than $1 trillion and larger checks would have pushed the final tally higher.

Trump’s aides had made positive comments about the bill lawmakers passed, but Trump had largely stayed out of negotiations. Last week, he had complained to some aides that he thought the $600 stimulus checks were too low and wanted them raised to $1,200 or $2,000, but aides had convinced him not to intervene, saying it could scuttle the whole package.

Some aides were stunned that Trump weighed in the way he did after his economic team had publicly praised the bill.

But administration officials had negotiated the bill with lawmakers in the final days without explicitly securing Trump’s approval, aides said. He had largely been distracted with overturning the results of the presidential election.

Trump had long wanted to do more than $600 in checks and kept asking aides why they couldn’t agree to a bigger number, an official said.

He released the video Tuesday after a number of his aides, including Chief of Staff Mark Meadows, were already out of town.

“So dumb,” one administration official said. “So, so dumb.”

As the coronavirus pandemic began to move rapidly through the United States in March, Congress passed a $2.2 trillion spending bill to try to limit the economic impact. Many of that law’s measures expired over the course of the year, and the recent spike in new coronavirus cases — and the end of the November election — sparked a bipartisan coalition to seek a new bill. The measure that passed Congress on Monday night promised $900 billion in new assistance, including the $600 stimulus checks, enhanced unemployment aid for 11 weeks, small-business assistance and a range of other measures.

Trump’s top economic advisers had not signaled that he was unhappy with the bill. In fact, they had suggested they were quite happy with the way the package came together.

“I am pleased that Congress has passed on an overwhelming bipartisan basis additional critical economic relief for American workers, families and businesses,” Mnuchin tweeted seven hours before Trump’s video was posted.

Not all aides were supportive of the measure, though some kept their criticisms closely held.

Aides who dislike the bill used the fact that some of its unrelated spending provisions included foreign aid as a way to turn Trump against the measure, knowing that American money going to other countries raises the president’s ire.

Virtually all of the complaints Trump made in the four-minute video — including foreign aid agreements, aid to the Kennedy Center, fish management language and more — are not part of the $900 billion COVID relief agreement but rather included in other, separately negotiated parts of the legislation, including a $1.4 trillion omnibus appropriations bill and a measure authorizing $9.9 billion in water projects. These bills and many others were packaged together.

Two congressional aides who had been involved in the negotiations said they were unaware of any problems the White House had with the bill. On Sunday, Ben Williamson, a spokesman for Meadows, said publicly ahead of the bill’s release that Trump supported the legislation and would sign it.

Trump’s refusal to publicly embrace the bill as it moved through Congress made some aides nervous, raising the prospect that he would once again cannonball into the pool at the end with a public declaration.

“This is what happens with a president who places more trust in conservative fever swamp Twitter than his own Treasury Secretary. His administration helped negotiate this bill, and he just pulled down the pants of every Republican who voted for it,” said Brendan Buck, a former top aide to onetime House Speaker Paul Ryan. Ryan and Buck often struggled with the president changing his mind.

The president has also not shared the fiscal discipline that some of his aides, such as Office of Management and Budget Director Russ Vought, have and has told advisers that doing only $600 would not be “popular,” in the words of one senior administration official.

The House and Senate passed the bill with such large margins that they could probably override a veto if Trump tried to block the measure. But that process could take weeks. And in the video, Trump didn’t explicitly say he would veto it. He also didn’t commit, however, to signing it into law.