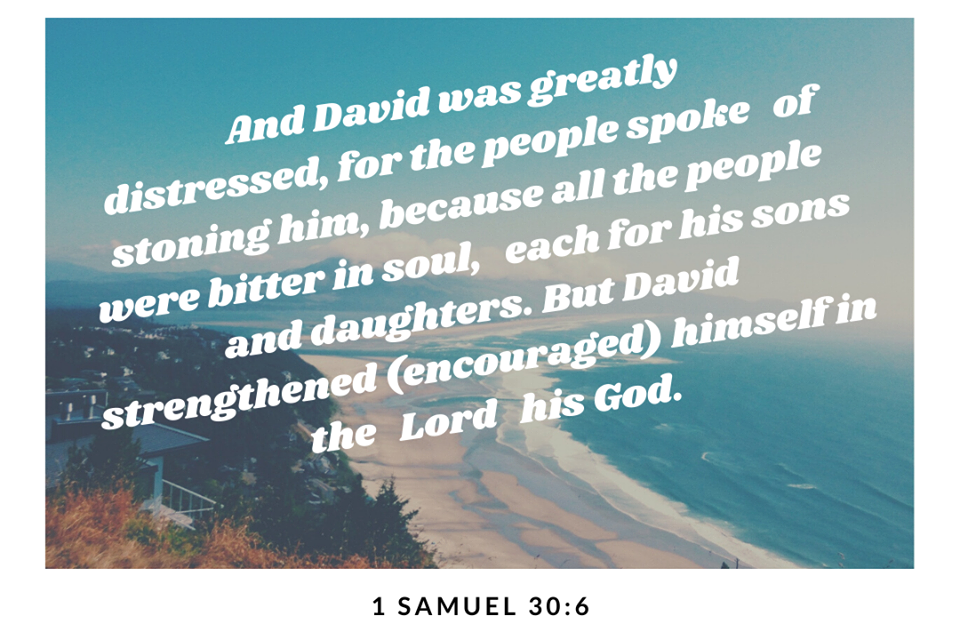 And David was greatly distressed, for the people spoke of stoning him, because all the people were bitter in soul, each for his sons and daughters. But David strengthened (encouraged) himself in the Lord his God.

David seemingly burst on the scene by killing Goliath. It was his ‘coming out party’ so to speak. What many fail to realize is that Davis was already well known by King Saul and both were very well aware of the fact that Davis had been chosen to be the next King of Israel. However, there would be about a 15-year time period from when David was anointed king by Samuel until he took the throne. In those fifteen years, he would fight battles and wars, run for his life and battle his flesh. He would fight to remain faithful to God, not knowing when God’s faithfulness would manifest for him. He saved the nation when he defeated Goliath only to be run out of that nation to reside to the land of the Philistines. Even though his life wasn’t like anything He had expected, David was “In the Making”

Today’s verse sums up what those 15 years were like and how vitally important it is to stay under the covenant you’re in during the making process. Difficulties and trials won’t break you if you are in covenant with God. In fact, they’ll make you. Like David discovered, how you talk to yourself when you are by yourself shows what you are established in. This kind of strengthening doesn’t happen because you simply maintain a positive attitude and keep your chin up. This kind of strength and encouragement only comes when you encourage yourself in the Lord. In other words, you remind yourself of the covenant that you’re in with God Almighty Himself. You hold firmly to the promises He’s made knowing that He’s never failed and He’s not going to start with you.

How do you talk to yourself when you’re lying in bed at night and all of the giants you’re facing seem to be overtaking you? What kind of conversation goes on in your brain when finances are far from where they need to be, or the report the doctor has given you is grim? Like David, you may feel as if the whole world is against you. But, it’s in these times that you become firmly established in the covenant you’re in with the One who has already purchased your life and victory with His own blood. Remain under your covering by holding on and staying faithful to that covenant. Those things that are trying to break you God will use to make you. – Love and Blessings, Pastor Jeff

Texas families now have until Aug. 21 to apply for food aid to make up for school meals