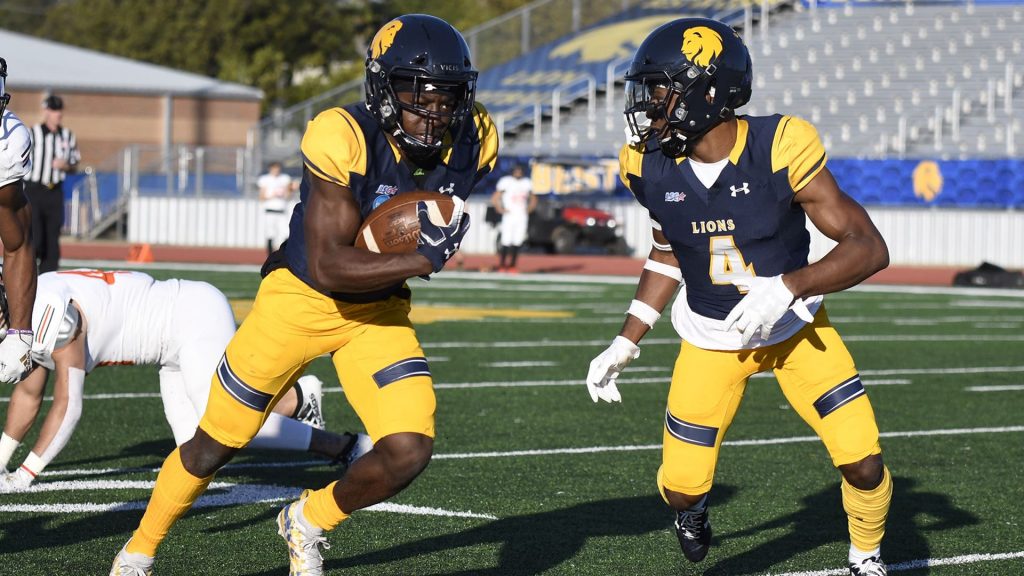 The No. 24 Texas A&M University-Commerce football team scored the game’s first 23 points and never looked back on the way to a 44-13 victory over the University of Texas of the Permian Basin on Ernest Hawkins Field at Memorial Stadium on Saturday evening.

With the victory the Lions move to 8-2 overall and 6-1 in the Lone Star Conference, while the Falcons fall to 3-7 overall and 1-6 in the LSC. The Lions claimed their 18th all-time undefeated home season and only the second such season in this century.

A&M-Commerce closes the regular season on Saturday, November 16, at 3 p.m. at Angelo State in San Angelo in a key conference and regional contest. The game will be televised regionally on Nexstar stations.

HOW IT HAPPENED
The Lions took the opening kickoff and drove downfield in short bursts, including a trio of third down conversions, but a field goal attempt was blocked. The defense wasted no time rebounding, as Kohou intercepted the Falcons’ opening pass and returned it 28 yards for a touchdown to give A&M-Commerce a 7-0 lead with 8:43 left in the first quarter.

Jaquorious Smith (Kilgore) partially blocked a punt on the Falcons’ third drive to set the Lions up with a short field. After an early pass interference penalty put the Lions inside the UTPB 5-yardline, Smalls connected with Tyler Guice (Atlanta, Ga.) for a 3-yard touchdown pass to make it a 14-0 Lion lead with 3:04 left in the first quarter.

The Lion offense drove well throughout the remainder of the first half, but had to settle for Viquez field goals on three drives. The junior’s previous season long was 44 yards, and he extended that twice with makes of 47 and 48 yards early in the third quarter.

Edwards-Cooper’s coverage downfield was a catalyst for those scoring opportunities, as he snagged opposition passes on either side of the halftime break. Viquez’ third field goal of the day put the Lions ahead 23-0 with 7:49 left in the third quarter.

The Falcons showed resiliency, scoring their first points on a 28-yard touchdown pass on fourth down with 5:10 left in the third quarter to narrow the margin to two scores at 23-7, but Smalls responded instantaneously.

On the first play of the next drive, Smalls connected with Childers, who was wide open in space and sprinted 78 yards for the score, pushing the lead to 30-7 with 4:47 left in the third quarter.

Jemal Williams’ rushing aptitude carried the Lions the rest of the way. A&M-Commerce’s next drive started with a 35-yard completion to Childers, followed by 35 yards of Williams carries. His 19-yard rushing score with 1:04 left in the third quarter made it a 37-7 contest.

UTPB scored early in the fourth quarter, but the Falcons’ point after attempt was botched, and blown up by a big Dawson tackle. A Lion fumble gave the Falcons an opportunity to cut into the lead, but Kohou intercepted a pass at the goal line to end any threat.

The Lions then used strong running and clock management to seal the game. Williams’ 13-yard touchdown carry put him over the 100-yard mark for the night and gave the Lions the final 44-13 margin with 4:28 left in the game.

INSIDE THE BOX SCORE
–  The Lions out-gained the Falcons by a 461 to 228 yard margin, holding UTPB to 3.4 yards per play.
– A&M-Commerce’s defense came up with four interceptions, as Kader Kohou (Euless – Trinity) and Jalon Edwards-Cooper (Spring – Dekaney) each picked off two passes. Kohou returned the first interception 28 yards for a touchdown on the Falcons’ opening offensive play.
– Jemal Williams (Inglewood, Calif.) had his first game rushing over the century mark, carrying the ball 18 times for 103 yards and a pair of fourth quarter touchdowns.
– Miklo Smalls (Plano – East Senior) completed 21-of-33 passes for 282 yards and two touchdowns, and also carried the ball 11 times for 73 yards.
– Matt Childers (Henderson) had three catches for 136 yards and a 78-yard touchdown.
– Jake Viquez (Rockwall) was 3-for-4 on field goal attempts with makes of 38, 47, and 48 yards. He also averaged 43.0 yards on four punts.
– Daryion Taylor (Humble – Atascocita) had six tackles with two tackles for loss to lead the Lions, who had 13 tackles for loss in the game. Neema Behbahani (Plano – Senior) and Vili Paea (Oakland, Calif.) also each had two tackles for loss.
– The secondary was active, breaking up eight passes in addition to the four interceptions. L.A. Dawson (Austin – LBJ) had four pass breakups and Darent White (Spring – Westfield) broke up three passes.