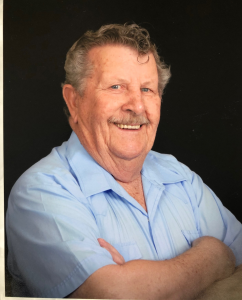 Born at home on June 10, 1935, in Anton, Texas, L. R. “Andy” Anders passed away peacefully at home on November 8, 2019, at the age of 84. He served his country in the U.S. Navy and then went on to have a long career as an aircraft mechanic. He worked at the Ryan Aeronautical Company in California before returning to Texas, where he joined Bell Helicopter in 1964. He worked in new product development and took great pride in his job.

On weekends, he could most often be found bass fishing at one of the state’s many lakes. Competitive by nature, he belonged to Lone Star Bass Club and several others and regularly took top honors in their fishing tournaments. It was at a club meeting where he met the love of his life, Sue, and soon enough she was casting a line alongside him. They married on December 28, 1987, and over the years, they competed in some 200 tournaments. Their favorite lake became Lake Fork, and they bought lake front property there in 1989. Andy retired from Bell Helicopter in February 1994, and quickly took up residence in his RV at the lake. He oversaw the construction of their home and shop and was delighted when Sue joined him there later that year. He had a green thumb, and took great pleasure in planting numerous rose bushes around the property, in addition to pecan trees, fruit trees, grape vines, blueberries, and blackberries. He also planted a huge garden, harvesting many pounds of tomatoes, zucchini, peppers, and more, which he freely gave to neighbors and church friends.

He joined Emory United Methodist Church in 1998, and gave of his time and talents to Good Samaritan food and clothing pantry. Also in retirement, he became active again in the Masons, with dual membership in Mars Hill Masonic Lodge No. 1440 Emory and Yantis Masonic Lodge No. 382, which he served as Master. In 2006, the couple gave up country living for Sulphur Springs. Andy remained active in the Masons and especially enjoyed contributing to Together Against Drugs, a program for fifth graders in Yantis. He and his wife became regular “cruisers” for a time, visiting Alaska, Australia, and Hawaii, among other places, and later they simply took pleasure in cruising around town in Andy’s convertible Camaro SS. They were active members at the First United Methodist Church, where he loved the Messengers Class.

He is survived by his devoted wife of 31 years, Sue Anders, his stepdaughter, Carrie Evans, his sister-in-law, Inez Willard, and other family and friends. He was predeceased by his parents Jack and Inez Anders, his beloved sister Jean, his brother Joe Pat, and his niece Vickie. Funeral service will be at West Oaks Funeral Home, located at 500 Hillcrest Dr., Sulphur Springs, at 2 pm on Tuesday, November 12, with visitation at 1 pm. Masonic graveside service will be at Shook Chapel Cemetery immediately following. In lieu of flowers, donations in Andy’s memory can be made to the First United Methodist Church of Sulphur Springs or a charity of your choice.