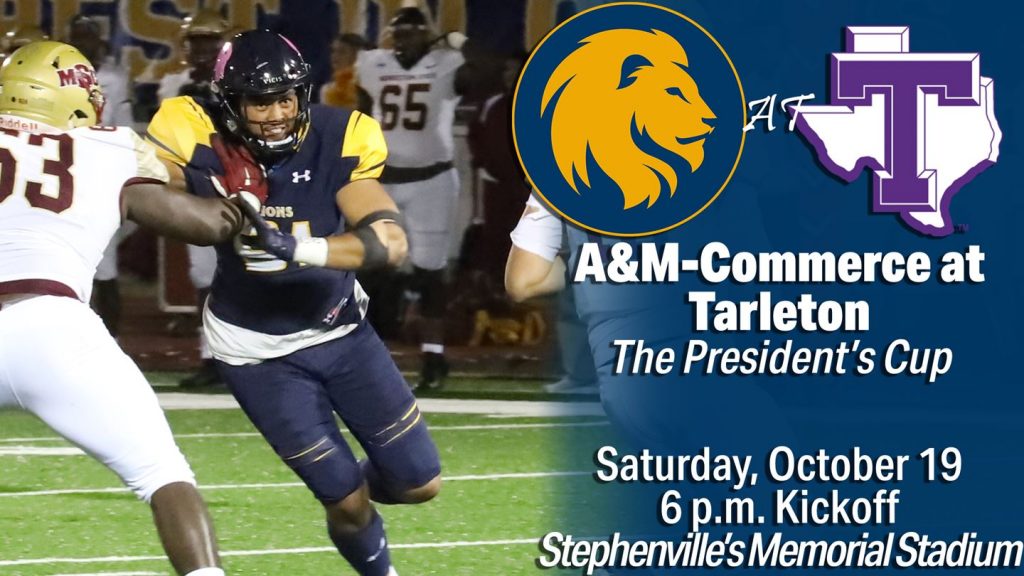 The No. 20 Texas A&M University-Commerce football team hits the road this weekend for another highly anticipated and important Battle for the President’s Cup, taking on No. 4-ranked Tarleton State University this Saturday.

BAILIFF BEGINS ON RIGHT FOOT
• Lion Football head coach David Bailiff was hired in December 2018 as the 20th head football coach at A&M-Commerce.
• Since East Texas joined the Lone Star Conference as charter members in 1931, Bailiff is the 13th head coach of the Lions.
• He has won all five of his “firsts” games at A&M-Commerce

• Bailiff was the head coach at Texas State University from 2004-06 and at Rice University from 2007-17. The Lions’ 2019 season will be Bailiff’s 15th season as a collegiate head coach.
• As a collegiate head coach, Bailiff has led a team to the NCAA Division I National Semifinals and has made five total postseason appearances with a 5-2 postseason record.
• The 2005 Texas State Bobcats were Division I National Semifinalists, and Bailiff led the Rice Owls to four bowls with a 3-1 record in those games.
• Bailiff has led teams to 10-win seasons in three seasons (one at Texas State, two at Rice). Under his watch, the Owls had the most wins in school history over a two (18), three (25), and four (30) year periods. Rice’s 18-9 mark from 2013-14 was the second-best of any FBS program in Texas.

FAMILIAR FOE
• In addition to the rivalry between A&M-Commerce and Tarleton, this marks the third time David Bailiff and Tarleton head coach Todd Whitten have squared off as head coaches.
• Their paths also crossed numerous times while the pair were assistant coaches, and while Whitten was an assistant coach and Bailiff was the head coach at Rice.
• Both previous occasions were while Bailiff was at Texas State and Whitten was at Sam Houston State.

LIONS CONTINUE RANKINGS RUN
• The Lions stayed at No. 20 nationally in the 2019 American Football Coaches Association Division II Coaches’ Poll released Monday.
• A&M-Commerce has been ranked in 59 consecutive AFCA polls, dating back to the 2015 preseason poll.
• This is A&M-Commerce’s 65th all-time appearance in the AFCA poll since its inception in 2000.
• In the polls recognized by Division II as the top rating system, the Lions have been recognized as a nationally ranked team 114 times since joining Division II in 1981.

NO SMALLS FEAT
• Quarterback Miklo Smalls has established himself as one of the most accurate efficient passers in the LSC and Division II.
• In five eligible games, Smalls has won the LSC Offensive Player of the Week award twice.
• Last week against Midwestern State, Smalls completed 70.3 percent of his passes in the game with five touchdown passes and 186 yards through the air. He also had 24 rushing yards.
• He completed passes to nine different receivers, and all five touchdowns were caught by different receivers.
• He now has a 12:1 touchdown to interception ratio in conference play
• He also won Lone Star Conference Offensive Player of the Week honors for his game against Eastern New Mexico, completing 13-of-15 passes for 243 yards with four touchdowns and one interception.
• His passing efficiency rating of 297.413 in that game is the second-best single-game performance by a quarterback in Division II this season.
•His 86.7 completion percentage in the game is seventh-best in the nation this year of passers with 15 or more attempts in a game.
•His 72.3 percent (94-of-130) completion percentage for the season ranks fifth in Division II.

PEREZ ASSIGNED TO XFL’S LA WILDCATS
• In other quarterback news, 2017 National Champion and Harlon Hill winner Luis Perez was assigned to the LA Wildcats in the XFL’s draft process on Tuesday.
• The former Lion has spent time with the LA Rams, Philadelphia Eagles, and Detroit Lions in the NFL, and the Birmingham Iron of the Alliance of American Football since leaving A&M-Commerce.
• In 28 career games (25-3) at TAMUC, Perez finished as the all-time leader in completions (665), passing yards (8,325) and passing TDs (78).
• In 2017, Perez set the single-season program records for pass attempts (596), pass completions (421), pass yards (4,999), passing touchdowns (46) and completion percentage (70.6).

RAMSEY IS ELECTRIC
• Junior return specialist Dominique Ramsey had a spectacular performance in the Midwestern State game, dazzling the national TV audience and earning A&M-Commerce’s Under Armour Student-Athlete of the Week award.
• He is a double major student-athlete in mathematics and electrical engineering.
• He recorded 150 all-purpose yards, including a highlight reel 65-yard kickoff return to open the game and set the Lions’ first score up on a short field. He also dazzled on two scintillating punt returns.
•The Lions scored within five plays after each of his kick and punt returns.
• All told, Ramsey had 65 kick return yards, 48 punt return yards, 14 interception yards, 15 rushing yards, and 8 receiving yards.
• He had two interceptions in the game, including a key snag in the end zone near the end of the first half to snuff out an MSU scoring threat which would have narrowed the deficit in a key spot. He also had an interception to help seal the game in the fourth quarter. He also made five key tackles in open space on the perimeter to limit MSU yards after the line of scrimmage.
• Earlier this season, his 55-yard punt return for a touchdown in the ENMU game earned him Lone Star Conference Special Teams Player of the Week honors.
• He became the first player in the Lone Star Conference to return a punt for a touchdown this season.
• He averaged 35 yards per punt return in the ENMU game and ranks second in the LSC in both punt and kickoff return average.
• He now has five career returns for touchdowns:

SHILLOW GETS STOPS
• Redshirt junior safety Alex Shillow has led the team in tackles in two games and ranks in the top 20 in the LSC in tackles per game at 6.2 stops per contest.
• The NCAA Division II National SAAC Chair recovered a fumble on kickoff coverage in the first half of the ENMU game and the Midwestern State game to set up Lion scores in each situation.
• He returned a blocked PAT for two points in the late stages of the second quarter at A&M-Kingsville.
• His 147 career tackles ranks third on the team behind
Behbahani and Mark Westbrook.
• Westbrook has 152 career stops from various linebacker and safety positions over the years.
• Westbrook reached the 100 career solo tackle mark at A&M-Kingsville.
• Westbrook also recovered a fumbled punt in the endzone at CSU-Pueblo.

APPROACHING CAREER TACKLE MILESTONE
• A number of Lions are nearing the century mark in career tackles from a variety of positions.

JAKE IS THIS YEAR’S MR. AUTOMATIC
• Junior kicker Jake Viquez extended his career-long in field goals with a 44-yarder at CSU-Pueblo.
• For the season, he is 7-of-8 on field goal attempts and a perfect 22-of-22 on PAT attempts.
• His 8.6 kicking points per game lead the LSC.
• Including the career of Lion Legend Kristov Martinez, the Lions have now made an NCAA Division II-record 125 consecutive PATs, dating back to the Eastern New Mexico game in 2017.
• This record only counts kicked PATs with successful snaps and holds. No two-point attempts – including failed snaps – are counted in this record.
• The previous record lasted 36 years, when Liberty made 123 PATs from 1976 through September 1983.

CROSSROADS OF URBAN AND RURAL
• The Lions’ roster has quite the mix of products from Texas’ largest and smallest football playing schools.
• A&M-Commerce is proud of its roots in rural in East Texas, as well as being a vital part of the Dallas-Fort Worth Metroplex.
• The Lions’ numbered roster (non-redshirting players) has 37 players who went to Class 6A high schools with 2,190 or more students in grades 9-12.
• Some of the largest schools in the state are represented:

•Three Lions competed in 2A-Division II, which is the smallest division of 11-man football in the state.