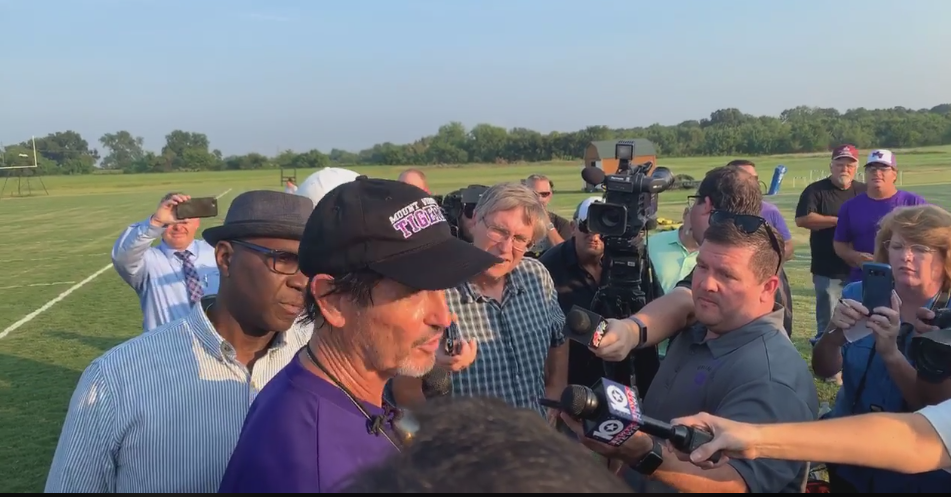 Briles did not answer questions regarding his time at Baylor. He referred all inquiries about his departure from the school to a statement from his legal counsel. You can read that statement below.

Our client Art Briles understands and appreciates the public’s interest in what occurred at Baylor University. However, Coach Briles is a defendant in one civil lawsuit brought against him in July 2018 relating to 2014 incidents that the Plaintiff alleges were physical (non-sexual) assault by her former boyfriend. Because of this pending lawsuit, Coach Briles will not discuss matters related to his employment at Baylor.

As Coach Briles’counsel, we are glad the facts are slowly coming to light, thanks mostly to the courage and tenacity of the 15 “Jane Doe” Plaintiffs who are fighting hard to get to the truth of what caused the systemic, institutional failures at Baylor. The facts these brave young women have uncovered support a much different narrative than the one perpetuated for years by those with an interest in placing blame on Coach Briles.

For example, in September 2014 — almost 7 years into Coach Briles’ tenure at Baylor— a 115page independent investigation report by Title IX consultants Margolis-Healy cited no Title IX failings in the football program, but did identify serious and widespread problems within Baylor’s campus safety leadership. No one has publicly identified these senior campus safety officials, or disclosed how, if at all, they were held accountable. The Margolis-Healy report was not shared with Art Briles during his employment, and it was concealed from the public until the Jane Does lawsuit brought it to light only recently. It has received very little public attention despite the fact it eviscerates the narrative the public has long been fed.

Margolis-Healy’s detailed, 115-page report stands in stark contrast to the 13-page “Findings of Fact” issued by the Baylor Board of Regents in May 2016, which contains no facts. To this day, the underlying detailed written findings and chronology created during the Regent-led investigation, the existence of which was first revealed in a hearing earlier this summer, are being withheld by Baylor, preventing victims, their families, and the many good people of the Baylor family from actually knowing the facts.

On August 30, 2018, Coach Briles filed a 34-page Answer in the single lawsuit in which he is a party. That document, which has received very little public notice, includes new, detailed information, supported by tape recordings and documents, demonstrating that what the public has been led to believe about Coach Briles is flatly false.

For example, contrary to the narrative perpetuated by those seeking to blame Coach Briles for systemic failures, Baylor’s Title IX Coordinator confirmed in a candid, recorded Title IX meeting that Baylor’s football program under Art Briles was proactive about requesting Title IX training, was hailed by Baylor’s Title IX staff as a model for integrating Title IX training in an athletic department, and was not a statistically disproportionate source of Title IX related accusations.

Also contrary to the mistaken, popular narrative, there is no evidence that any player was ever recruited to Baylor during Coach Briles’ tenure with a prior history of sexual or dating violence. In the one case that was used to perpetuate that myth, it has now been proven that the transfer player had never been accused at his prior school of sexual or dating violence, had not been suspended from the school or the football team, and was eligible to return to his former school and to the football team. All of this is contrary to the false narrative that Coach Briles was reckless in bringing young men into his program.

This will be the last public comment we have for the foreseeable future. We refer you to the Answer http://media.graytvinc.com/documents/Defendant+Art+Briles’+OriginalOriginal +Answer+filed+8-30-18.pdf and the Margolis-Healy report https://www.wacotrib.com/margolis-healy-report/pdf_da5d62fe-1f43-5e17-a944-b7bc22465fc0.htmlfor further response. If significant developments arise, we will try to keep you apprised of facts consistent with our duties to our client and to the court.