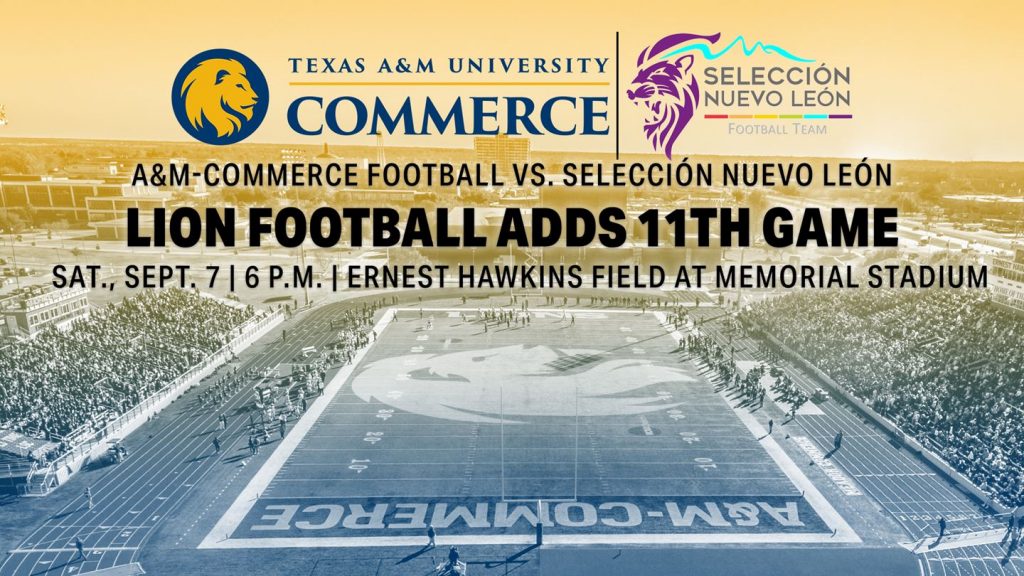 The Texas A&M University-Commerce football program has announced the addition of an 11th game to the 2019 playing schedule, as the Lions will host Selección Nuevo León for A&M-Commerce’s first-ever international football game. The first game of the David Bailiff era will be played on Ernest Hawkins Field at Memorial Stadium on Saturday, September 7, with kickoff at 6 p.m.

The addition of the game gives the Lions five home games and six road games on the 2019 schedule. Chairback season tickets are available at the Lion Sales & Service Box Office or by calling (903) 468-8756. General admission season tickets are priced at $48 and are also available online atWeAreLionsTix.com. Single game ticket sales will be announced at a later date.

Selección Nuevo León represents the Asociación Estatal de Futbol Americano de Nuevo León (AEFANL), which is the state organizing committee for the state of Nuevo León, including the city of Monterrey. This is El Selección’s third season of competing at the state level while associated with the Autonomous University of Nuevo León (UANL).

“We are pleased to welcome our visitors from Nuevo León for this unique opportunity,” said A&M-Commerce Director of Athletics Tim McMurray.  “As we tirelessly pursued our 11th game for the upcoming 2019 season, the chance to host a relatively new football program while engaging with an international partner of higher education provided us with a sensible solution.  Although not an NCAA member institution, we believe the contest will have numerous benefits for our football program, our campus, the Northeast Texas region, and other constituent groups who may not otherwise be exposed to our institution or intercollegiate athletics program.”

El Selección is the top-level team in the state, made up of players who had successful careers at some of the top preparatory programs in Mexico, including Auténticos Tigres of UANL, who won the 2018 ONEFA national championship, and Monterey Tech’s Borregos Salvajes, who were the 2018 CONADEIP national runners-up.