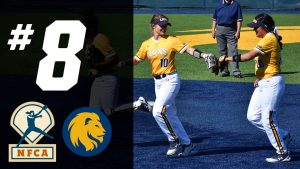 The Texas A&M University-Commerce softball team is the No. 8 ranked team in the nation in this week’s National Fastpitch Coaches Association coaches poll. The Lions held their spot from last week’s ranking. The rankings were released Wednesday by the NFCA. The Lions have been nationally ranked in 23 consecutive polls dating back to last season.

The Lions are coming off of a 2-1 series win over Tarleton, who was ranked No. 21 in last week’s poll. The Lions are currently 35-10 on the season and have a conference record of 21-6, which is the best record in the league. They lead the nation in fielding percentage and rank second in the nation in home runs per game. A&M-Commerce also ranks in the top 10 in Division II in slugging percentage, on base percentage and scoring.

A&M-Commerce is one of four teams from the LSC in this week’s top 25 poll, and one of three teams in the top 10. A&M-Kingsville is ranked third, followed by West Texas A&M at sixth, A&M-Commerce at eighth and Tarleton at 22nd.

The No. 8 Lions will return to action on April 26 for their final series of the regular season. A&M-Commerce will host Cameron in a three-game series. The teams will play a single game on Friday, April 26 at 6 p.m. and a doubleheader on Saturday, April 27 beginning at 1 p.m. All games will be played at the John Cain Family Softball Field.

Tickets to the series against Cameron are available at WeAreLionsTix.com, by calling (903) 468-8756, by visiting the Lion Sales & Service Box Office in the Field House or by purchase at the gates of the field.