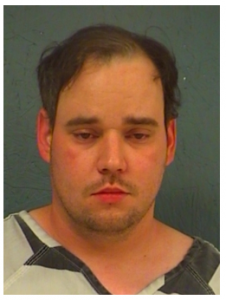 Brumley was pulled over by DPS for driving in the left lane while not passing. During the stop he displayed signs of nervousness consistent with criminal activity and gave consent to a search of his vehicle and belongings.

Brumley was travelling with a large stuffed animal in his passenger seat and during the consent search, officers located several children’s toys and condoms in the driver’s seat back. They also located coloring pages and a backpack containing a stuffed animal, diapers, and baby pacifiers. They then asked for consent to search Brumley’s phone and he consented. Multiple obscene photos were observed during the search of the phone. Two photos depicted what appeared to be children wearing diapers in lewd and provocative positions.

Based on the totality of the circumstances, Brumley was placed under arrest for Possession of Lewd Visual Material Depicting a Child. He was transported to Hopkins County Jail where he is currently held. Bond has not been set.