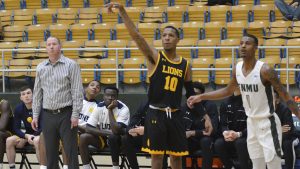 The No. 20 Texas A&M University-Commerce men’s basketball team defeated Eastern New Mexico 112-99 on the road on Saturday afternoon. The Lions got behind early in the game but were able to tie the game at halftime and pull away in the second half.

The Lions return home to host Western New Mexico on Thursday. The game will be played at 7:30 p.m. at the Field House, following the Lion women’s basketball team against the Mustangs. Tickets for the doubleheader are available at WeAreLionsTix.com, by calling (903) 468-8756 or by visiting the Lion Sales & Service Box Office in the Field House.

INSIDE THE BOX SCORE
– Reggie Reid (Harlem, Ga.) had a triple double with 16 points, 13 assists and 12 rebounds. He is the first player in the LSC to have a triple-double this season.
– Willie Rooks (Houston – North Forest) scored a season-high 27 points, including eight three-pointers.
– Trey Conrod (Kilgore) had 14 points, Deonte Terrell (Chicago, Ill.) had 12 points and Carson Tuttle (Mukilteo, Wash.) and Srdan Budimir (Karadjordjevo, Servia) each had 11 points.
– The Lions shot 50 percent from the field in the game and made 49 percent of their three-pointers (20-for-41).
– ENMU played the final 31 minutes of the game with four players available.

HEAD COACH JARET VON ROSENBERG AFTER THE GAME
– On the play of Willie Rooks: “He can really shoot it when he gets a chance. Hopefully this will get him going. He’s been playing well and we need him to continue to play well.”
– On the team getting the road win: “At the end of the day, we just wanted to get out of here with a win. It’s tough to win on the road, especially in the Lone Star. We were able to stay composed enough and get the W.”

HOW IT HAPPENED
It was an even beginning to the game as the teams split the first 16 points of the game. After the Lions took the lead, ENMU went on a 10-0 run to establish a lead. The Greyhounds pushed their lead to as many as 17 at the 11 minute mark.

The teams traded baskets for several minutes as both teams were hitting shots. With 5:32 remaining in the half, ENMU held a 19-point advantage.

The Lions then began to storm back, catching fire from beyond the arc. Budimir and Tuttle hit consecutive threes to cut into the lead and both had another as the Lions cut the lead to just two points. Reid then hit a three with 1:30 remaining in the half to give the Lions a lead. After ENMU made a shot, a dunk from Reid gave the Lions back the lead. The Greyhounds made a shot in the final seconds to send the game into halftime tied at 53.

Reid, Conrod and Budimir all had eight points in the first half. The Lions shot 42 percent in the half and shot 46 percent from behind the arc.

For the next four minutes, the Lions maintained their double-figure lead before pushing their lead even further. The Greyhounds cut the Lion lead down to 12 points late but A&M-Commerce left with the win.