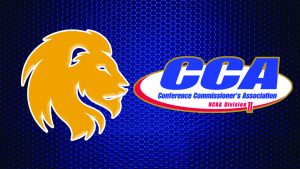 Hobbs earns his first D2CCA All-Region honor. He was a Don Hansen’s Second Team All-American in 2017, second team all-Lone Star Conference in 2018, and first team all-LSC in 2017. This season he had 35 receptions for 343 yards and four touchdowns. He completed his Lion career ranked ninth in school history with 113 receptions for 1,356 yards and 15 touchdowns.

Martinez adds to an impressive list of accolades, finishing his Lion career as NCAA Division II’s all-time leading kick scorer with 449 points. This places fourth in scoring among all college players in the state of Texas. The LSC’s all-time leading scorer earns all-region honors for the third straight year, elevating to the first team for the first time. He was 21-of-26 on field goals with a school-record long of 55 yards. He also made all 48 PAT attempts on the season, and ended his career with a streak of 103 PATs made in a row. He was also fantastic in the kickoff phase, as the Lions ended the season ranked No. 1 nationally in kickoff coverage.

Kincade earns his first career all-region honor thanks to a pair of kickoff returns for touchdowns – one for a school-record 100 yards against West Texas A&M, and another for 70 yards at Western New Mexico. For the season, he averaged 31.8 yards per return (668 yards on 21 returns). He also had an interception, a blocked kick, and 23 tackles on the year.

Simon earns all-region honors for the first time in his career after being named first team all-LSC. He started in every game for the Lions as a redshirt sophomore, establishing himself as one of the league’s top young talents and most dominant linemen.

Onuoha is on the D2CCA honor list for the first time. The two-time all-LSC honoree made 47 tackles with 14.5 tackles for loss, 6.5 sacks, a forced fumble, an interception with a 48-yard return, nine quarterback hurries, and a pair of blocked kicks in his senior campaign.

Saathoff also earns his first D2CCA all-region honor. He is a two-time all-LSC winner and finished the season with 103 total tackles, 15.0 tackles for loss, 2.5 sacks, a fumble forced, a fumble recovered, and a blocked kick. He finished his Lion career ranked third in school history in total tackles with 312, and his 52 games played are a school record.

Ramsey’s electric playmaking ability earned him his first career all-region honor after earlier being named first team all-LSC. He had three interceptions with 226 yards of returns and two touchdowns, including a 99-yarder, leading the nation in interception return yardage. He also averaged 12.9 yards on 36 punt returns with two touchdowns. He made 37 tackles and had six pass breakups.

Road Work Planned for SH 37 from Mt. Vernon to Winnsboro During Week of December 3rd, 2018