No. 1 Texas A&M Commerce Lions Football Teams Hits The Road For First Time In 2018 For Matchup At William Jewell 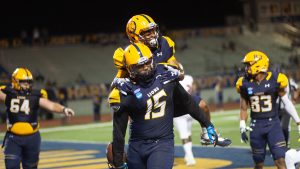 The No. 1 Texas A&M University-Commerce football team hits the road for the first time in the 2018 season to take on the William Jewell Cardinals. This is the second game of the season for the Lions, but the first for the Cardinals, whose opening contest against Drake was cancelled due to lightning.

WHO: Texas A&M University-Commerce at William Jewell College
WHERE: Liberty, Mo. | Greene Stadium
WHEN: Noon on Saturday, September 8
RECORDS: The Lions are 1-0 overall and 1-0 in the Lone Star Conference after a 37-36 double overtime win over Texas A&M-Kingsville. This is the first game of the season for William Jewell.
RANKINGS: Texas A&M-Commerce is ranked No. 1 in the AFCA Coaches’ Poll and No. 2 in the D2Football.com Media Poll. William Jewell is unranked.

LIONS LOOK TO EXTEND STREAK
• With the 37-36 double overtime win over A&M-Kingsville to claim the Chennault Cup for the seventh straight year, the Lions extended the nation’s longest active winning streak to 11 games.
• The Lions scored 37 points for the second straight game, having also scored 37 in the National Championship Game win over West Florida.
• The victory was the second consecutive one-point win in a season opener for the Lions, who defeated North Alabama 8-7 in the 2017 opener.
• This is A&M-Commerce’s seventh straight Chennault Cup win, tying A&M-Kingsville’s streak from 1992-99 as the longest winning streak in the 65-game series.

ALL-TIME AGAINST THE CARDINALS
• This is the second meeting between the two schools, with A&M-Commerce earning a 59-6 victory on CommUniverCity Day in 2017.
• A&M-Commerce is 3-0 against current Great Lakes Valley Conference (GLVC) teams, with a pair of wins over Truman State in 1937 and 1938 and last year’s win over WJC.

SUCCESS AGAINST THE SHOW ME STATE
• The Lions are 6-0 all-time against schools from the state of Missouri, defeating Missouri Valley College 26-7 in the 1958 Tangerine Bowl, and taking both ends of a home-and-home series with Southwest Missouri State (now Missouri State) in 1967 and 1968.
• This is A&M-Commerce’s first game in the state of Missouri since the 37-15 win over SMSU in Springfield in 1967.
• The Lions’ home practice site during the 2017 National Championship preparations was Winnetonka High School in Kansas City.

CARTHEL PICKS UP WIN NUMBER 50
• Head coach Colby Carthel now ranks fifth in A&M-Commerce history in coaching wins with 50 wins.
• He is now only 13 wins behind Lion and LSC legend J.V. Sikes, who sits in fourth place with 63 wins.

SENIORS ON PACE TO SET SCHOOL RECORD
• The 2017 senior class established the school record for wins in a four-year period with the victory in the National Championship Game with 42 games won in a four year span.
• The 2018 seniors are already in the top five groups in school history at 34-7 with a guarantee of 10 more games in the season.

MARTINEZ PICKS UP LSC HONORS IN WEEK 1
• Kicker Kristov Martinez scored seven points in the opening game to earn LSC Special Teams Player of the Week honors.
• The graduate student from Edinburg was 1-for-2 on field goal attempts and was 4-for-4 on PAT attempts,
• He is now 55-of-73 on field goal attempts in his career, which ranks 14th in Division II history. The Division II career record is 82 made field goals.
• Martinez is the Division II active career leader in made field goals, and ranks fourth in all NCAA divisions behind LSU’s Cole Tracy  (72), Wisconsin’s Rafael Gaglianone (62) and Toledo’s Jameson Vest (58). Those four kickers are the only NCAA players through the first week of 2018 with more than 50 field goals to their credit.
• LSU’s Tracy is actually a Division II transfer from Assumption (Mass.), where he won the Fred Mitchell Award in 2017.
• Martinez is on the preseason watch list for the Mitchell Award.
• For his career, Martinez has made 180-of-187 PAT attempts and is the Division II active career leader. Oklahoma’s Austin Seibert is the all divisions active career leader with 231 made PATs. Martinez is fourth in all divisions behind Seibert, Ohio State’s Sean Nuernberger (188), and North Dakota State’s Cam Pederson (187).
• Martinez was named second team all-Super Region Four by the Division II Conference Commissioner’s Association and Don Hansen’s Football Gazette.
• He has been named a second team preseason All-American by Lindy’s.
• Martinez was also named LSC All-Academic and A&M-Commerce’s male LSC Scholar-Athlete for 2017-18.

WHEELER DEALS IN FIRST CAREER START
• Lion quarterback Preston Wheeler made his first career start in the Chennault Cup win over A&M-Kingsville, providing poise in the pocket to lead the blue and gold to victory in his first-ever extended action.
• The redshirt junior from Austin Bowie completed 23-of-48 passes for 298 yards with three touchdowns and an interception.
• Wheeler turned it on after halftime, completing 17-of-34 passes for 206 yards, three touchdowns, and no interceptions in the second half and the overtime periods.
• Wheeler completed passes to six different receivers, with four wide receivers, a tight end, and a running back each catching passes.

NEWCOMERS ON THE BOARD
• Two new Lions scored in their first games in the blue and gold.
• Redshirt freshman wide receiver Matt Childers (Henderson) caught a 17-yard touchdown pass in the third quarter for the Lions’ first points of the season.
• Junior quarterback Kane Wilson (New Orleans, La.) came into the game and scored on his first touch for the Lions with a 1-yard touchdown carry in the third quarter.

“BIG MIKE” MAKES BIG NOISE IN OPENER
• Michael Onuoha (pronounced uh-no-ha) was a menace in the backfield in the opening game.
• The senior from Edmond, Okla., had five total tackles with 3.5 tackles for losses of 16 yards, and 2.5 sacks for losses of 15 yards.  He  also had five quarterback hurries.
• Prior to the season, Onuoha was named an honorable mention All-American and second team all-region pick by Don Hansen’s Football Gazette. He was also a first team all-Lone Star Conference pick.
• “Big Mike” ranked seventh in the LSC with 12 tackles for loss and recorded 56 tackles on the season.

HARRIS AWARD NOMINEE IS TOP TACKLER
• The Lions’ leading tackler in senior Brucks Saathoff returns to lead the A&M-Commerce defense.
• The San Antonio native has led the Lions in tackles for the last two seasons.
• He was the overall leader in tackles for the Lions in the opener with eight stops against A&M-Kingsville.
• In 2017, Saathoff was the Lion leader with 101 tackles, averaging 6.7 stops per game.
• For his career, Saathoff has 217 tackles, which is the leading mark for the Lions.

SUCCESS ON FIELD AND IN CLASSROOM
• One of the Lions’ top defensive performers was also one of the nation’s top academic performers in 2017.
• Senior Garrett Blubaugh returns as the Lions’ second-leading tackler. Blubaugh made 84 stops in the National Championship season, and excelled in the playoffs.
• The Keller product made four tackles in the opener against the Javelinas and had a key pass breakup on the goal line on a wide receiver pass.
• Blubaugh was the football winner of the NCAA Elite 90 Award, which recognizes the top grade point average at the national finals site.
• The biological sciences major was also a Lone Star Conference All-Academic selection.

LEAGUE’S TOP TIGHT END RETURNS FOR LIONS
• The “A” position in the Lion offense must display versatility as both a traditional tight end and a receiver.
• The 6-foot-3, 255-pound Vincent Hobbs did just that in 2017, earning multiple honors and making many highlights in the National Championship campaign.
• In the opener, the Mesquite native had six receptions for 47 yards and a 12-yard touchdown catch early in the fourth quarter.
• He has been selected as a first team preseason All-American by Lindy’s and noted as a potential professional football candidate.
• He was a Don Hansen’s Football Gazette second team All-American and first team all-region selection, as well as an all-Lone Star Conference first team selection.
• He had 64 receptions for 785 yards and seven touchdowns in 2017.

WIMBERLY NEARS TOP OF RECEIVING CHARTS
• Wide receiver Marquis Wimberly made the highlight reel with the game-tying touchdown catch in the fourth quarter, but the senior’s consistency was key down the stretch.
• The Duarte,  Calif., native had eight receptions for 99 yards and the OT score.
• The eight receptions is tied for the most catches in the Lone Star Conference in the opening week of the season, while his 99 yards is the third-most in the league
• In 2017, he had 64 catches for 794 yards and six touchdowns, with four games over 100 yards receiving. He had a season-best nine receptions for 120 yards in the regional semifinal win at Central Washington.

TRACK ALL-AMERICAN EXCELS IN MULTIPLE ASPECTS
• The Lions needed a boost in the third quarter of the win over A&M-Kingsville and cornerback Reggie Kincade provided that spark in multiple aspects of the game.
• The senior from Everman is now the LSC leader in kick return average as he had returns of 45 and 35 yards to set up short fields for the Lions with the 40.0 yard per return average.
• He then snagged a key interception on third down late in the fourth quarter, setting up the drive which would send the game to overtime.
• Kincade established himself as a big return threat in the National Championship Game, returning a kickoff 99 yards for a touchdown.
• He has won All-American honors in the 4×100 meter relay twice in his career on the Lion track team and is part of three school record holding relay teams.