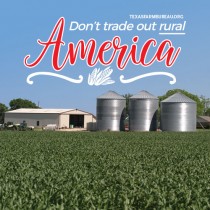 The world is hammering out new trading relationships. Congress is negotiating a new farm bill. I’m reminded again that agriculture often winds up being traded off for some other issue that someone thinks is more important.

U.S. trade routinely runs deficits in the balance of payments. This would be substantially worse if our agricultural products did not trade worldwide in surplus. Agriculture is an easy target when other nations look for a way to retaliate against tariffs or other trade restrictions.

The House version of the farm bill failed recently due to an unrelated issue—immigration. Another vote will be taken soon, and the Senate is working on its version of the bill.

These issues are playing out against the backdrop of some bad economic times on the farm. Net farm income is down 52 percent from five years ago. Without crop insurance in the farm bill, many farmers cannot accept the risk of planting. The current bill expires in September.

Hearts of Life Animal Rescue Dog of the Week-Meet Abby!