Home Local News YOUR TEXAS AGRICULTURE MINUTE Losing farmland: How much is too much? Presented by Texas Farm Bureau’s Mike Miesse
Local News

YOUR TEXAS AGRICULTURE MINUTE Losing farmland: How much is too much? Presented by Texas Farm Bureau’s Mike Miesse 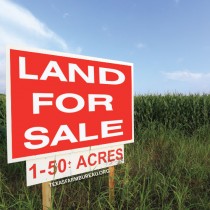 In the United States, cities were born in places with good cropland, because agriculture was the prevailing industry of America’s first century. Now, as cities expand, they absorb some of the world’s best farmland. A story in the San Francisco Chronicle paints a bleak picture on the loss of land on which we can grow food.

The good news is that farmers, thanks to research and modern technology, have learned to grow more food with less. With better seeds, techniques and equipment, we’ve squeezed more production out of the same amount of land, or even less.

What else can be done? In Texas, we tax farmland on production instead of market value, preventing farmers from being taxed off their land.

Perhaps we can further incentivize keeping our best farms. Because good cropland is something we cannot do without.