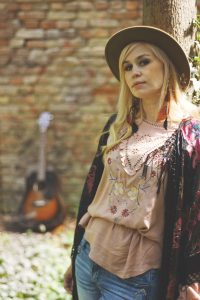 “One of the most distinctively memorable Americana albums of recent years was made by a tirelessly touring, talented Swedish songwriter Sofia Talvik“ wrote New York Music Daily when Sofia Talvik’s toured along the East Coast last year. This Swedish singer/songwriter has now toured through 47 states in her little 1989 tour RV otherwise known as Lil’Chief.

“For the last tour I asked my fans on Facebook what they thought I should call the tour, and I got a lot of fun suggestions like “The one set of tires tour”and “A bloody long drive tour”. Looking at the amount of miles I was going to cover that tour I would land at just over 5000 miles, which I decided was a good name to describe the tour. However in the end of that tour we ended up driving just short of 9000 miles”, Sofia says. “I guess I have to get myself a brand new set of tires soon.”

She’s seen more states, and more places in the USA than the average american, and she seems to love it. Sofia Talvik was charting as the 3rd most played artist on Folk Radio USA in December, and her Christmas album “When Winter Comes” charted as no 5. Her Christmas single charted as no 7.

Her latest album ”Big Sky Country” (named one of the 5 best Americana albums of the year by British newspaper The Telegraph) celebrates her love for the vast plains, big mountains and sandy coastlines in the states that she toured through, as well as the warm and quirky people she met on the road.

She’s played the big festivals like Lollapalooza and SxSW, opened for artists like Maria McKee and David Duchovny (X-files, Californication) but the intimate setting of a smaller stage where she can casually joke and communicate with the audience is really where her strength as a performer shines the most.

“A singer/songwriter who is able to evoke the essence of Laurel Canyon circa the ’60s.” writes Lee Zimmerman on NoDepression, and continues to compare her to giants like Joni Mitchell and Judy Collins. ”In many ways, Talvik seems destined to become their heir apparent, given that her songs are striking in an effervescent and incandescent sort of way.” he continues.

Como-Pickton One Act Play Advances to the Bi-District contest