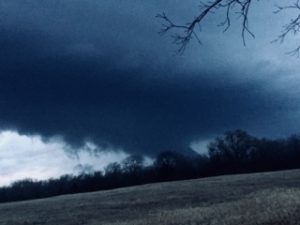 A possible tornado touched down in Winnsboro last night around 8:30 according to the National Weather Service. Damage to apartment buildings and homes have been reported with roofs having been destroyed on several structures. Winnsboro Mayor Richard R. Parrish has declared a “State of Emergency” for the town. Governor Greg Abbott released a statement on Twitter, “I’m working with the Texas Dept. of Emergency Management to ensure that Winnsboro, Texas has the assistance it needs to respond to this tornado. I haven’t heard of any injuries yet. Say a prayer that it stays that way.” City leadership has set up a command post at City Hall for anyone needing assistance due to the damage.