Our Labor Day Weekend in Houston by John Litzler 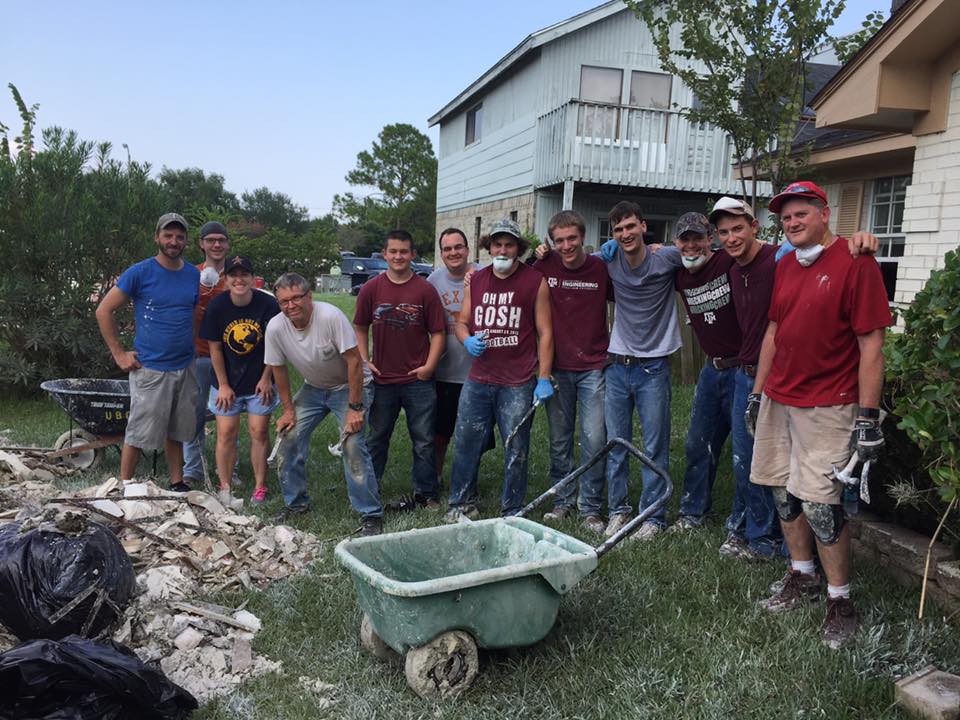 As Will begins to sweep the dining room floor, I realize, for the first time, just how beautiful the home must have been before hurricane Harvey came to town. Before it sat under water and sewage. Before the walls had to be torn out to prevent molded sheetrock and insulation from making the house permanently uninhabitable. The breath collected in my mask has fogged up my glasses so I wipe them with my shirt sleeve to take a better look. The marble floor is a beautiful swirl of white and pink. I turn my gaze from the floor to the chandelier and wonder for a moment how much love and laughter was shared in this room at dinners with family and friends.

It’s Saturday, September 2nd. Hurricane Harvey hit Texas just over a week ago. For the past week, I’ve watched the destruction play out on tv and social media. I’ve watched first responders and ordinary citizens be everyday heroes as they rescue people from danger. Many areas are still flooded, only accessible by boat. In some areas, though, the water has receded and there’s a need not only for supplies but for people. A need for people to get into homes and mitigate the damage caused by the floods. 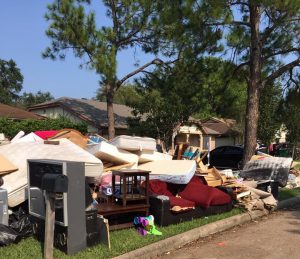 I’m in Houston with my wife, Stefanie, and several church members and friends from San Antonio. We are working with Heritage Park Baptist Church in Webster, Texas. I’m also with some friends from Sulphur Springs High School. Blake Weir, Michael McAndrew and I haven’t been in the same room together for over a decade. But here we are, in a stranger’s home, pulling out all the sheetrock and insulation we can. Thanks to the generous donations of the people of Sulphur Springs, we have an abundance of tools to use and to leave for other crews to use after we’ve gone home. Will is a junior in high school. His school has been closed all week, so he just walked up and volunteered to help. He is a hard worker and we’re glad to have him on the team.

We aren’t alone or unique in the restoration effort. People from all over the country have come to help. Many of the groups are religious organizations. When we arrived at the home with the marble dining room floor a group from another church was already working, all the furniture was already out on the curb. A local high school football team cancelled practice and the players were going into neighborhoods and helping with the heavy lifting. 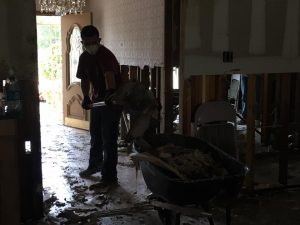 The work is hard. The first thing to hit your senses as you walk through the front door is the smell. The kind of smell that hangs in your nostrils long after you’ve showered and changed into clean clothes. It’s not just the musty smell of water, damp wood, and insulation. It’s the smell of the sewage. Sewage that was mixed with the water and has been sitting in the Texas heat for days. And that’s the second thing you notice – the heat. The temperature is already pushing into the mid-90s and this home doesn’t have electricity. Some of the homes we are working in have air conditioning that works, some don’t. The combination of the smell and heat forces frequent breaks.

A group of us steps outside for some fresh air and water. I use the curb to scrape some of the sewage mud off my shoes. I look up and down the street. In front of nearly every home there is a pile of furniture. People’s keepsakes and memories tossed to the curb along with wet carpet, padding, and drywall. A home without a pile in front indicates that either the homeowners haven’t returned yet or that they are physically unable to do the work and are waiting for some kind souls (like the high school football team) to come help. The street is long and the piles seem unending. The next street looks the same. And the one after that. And the one after that. The damage to the neighborhoods appears infinite. I’ve forgotten just how packed with people the greater Houston area is.

As I turn my attention back to this yard, I notice a wheelchair and shower chair. Mrs. A, the owner of the home, is out in the yard and I ask her about them. The home used to belong to Mrs. A’s mother before she passed away. Now Mrs. A’s sister lives there. The sister is handicapped and the wheelchair and shower chair are hers. At the time of the flood, Mrs. A and her husband were out of town. She tells me about the terrifying call she received from her sister around 2 a.m. as water began to fill the house. Mrs. A did everything she could to help her sister from afar.  A little after 8 a.m. a boat with some men in it came to the house, found Mrs. A’s sister on the bed (which the water had nearly engulfed at this point), and rescued her. The sister was staying at the home of her caregiver, a nurse, for the time being. Mrs. A had other family members in the Houston area. All their homes had flooded and none of them had insurance policies that included flood damage. 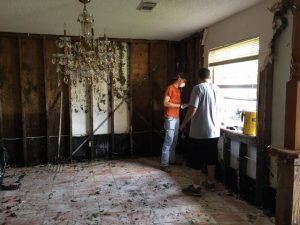 There are times she and her husband are surprisingly strong. They keep staying in the house and continuing to work while everyone else takes water breaks. There are times they are understandably powerless as an item brings back a cherished memory and the needs to step out of the room for a moment. Throughout it all they remain thankful. They are thankful everyone in their family is safe. They worry about us taking enough breaks and drinking enough water. They are thankful we are helping and they keep trying to take everyone’s name down so they can remember who came to help them.

It’s been a long day and we are exhausted. It’s time to pack up and get dinner. Stefanie has work tomorrow so we will be driving home tonight. Blake and Michael will stay and work again tomorrow. It’s incredible to see the efforts of those who supply thousands of hot meals every day. The meals are both for victims of the storm and for volunteers. Each team tends to work in about two homes a day. One home in the morning and a different home after lunch. Of course, the homes aren’t repaired by the time we leave, but once everything wet has been removed from the home, the immediate danger is gone. Mold is toxic and it grows quickly. With each home we work in the list of people needing assistance gets longer not shorter. Yes, we can mark that one home off the list, but we add to the list all the other homes on the street that still need help.

The work is not done. The areas affected by Harvey still need supplies, but more importantly they need people to continue volunteering. We’ve seen the resiliency of the American people, and Texans, first-hand. Seeing the devastation and the response to it is simultaneously heart-breaking and uplifting. For us, the nightmare is temporary. While we will wake up in our own beds next week, the people in these neighborhoods will continue to wake up to their new reality. Recognizing this in the car, we begin to begin to discuss when we might be able to come back and do more work. We talk about our hopes we never see a storm like that again. But in the Atlantic, Hurricane Irma is gaining strength on the way to becoming a Category 5 hurricane.