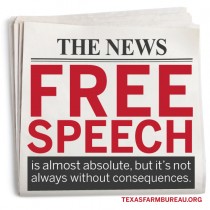 I have a healthy respect for the first amendment. But what happens when the press behaves recklessly? We have a recent object lesson in a South Dakota courtroom.

In 2012, a major news network attacked a perfectly safe agricultural product, saddled it with a “pink slime” nickname and caused the loss of dozens of jobs. Should there be consequences?

Lean, finely textured beef has long been an approved product. But the pink slime nickname exploded in news reports. The product was hit hard in the marketplace. Beef Products Inc., who makes the product, was forced to shut down three plants. BPI alleged that ABC News had defamed them with errors and omissions.

The settlement was undisclosed, but Reuters dug out the information by examining company documents.

Free speech is almost absolute, but it’s not always without consequences.

Hearts of Life Animal Rescue-Dog of the Week- Meet Ginger!