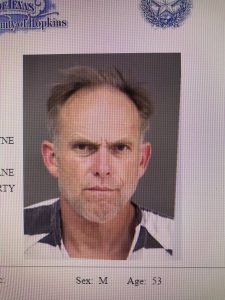 According to the Hopkins County Sheriff’s Office Facebook page escaped inmate Barney Ebey has been captured and returned to custody. The person that helped facilitate the escape and was seen on video giving the escapee a ride away from the area is now in custody, as well. It has been determined that it was a planned escape and this person was scheduled to pick up the escapee. It was reportedly a recently released prisoner that facilitated the escape. Ebey escaped during work duty at the Hopkins County Civic Center on Tuesday morning at approximately 8 am. Ebey was originally charged with Engaging in Organized Crime.