More Than 500 Students Graduate from PJC 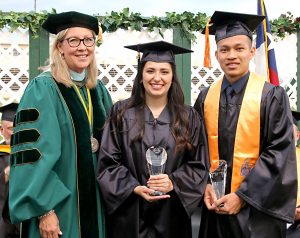 The west stands of Noyes Stadium was packed as Paris Junior College held its 92nd spring graduation ceremony Friday evening, May 12. PJC had 512 students graduating from PJC with a certificate or associate degree, and nearly 260 students chose to participate in the graduation ceremony.

Among the graduates were students who had received state and national honors in their degree fields and ranged in age from 17 to 77 years. They were 48 percent male and 52 percent female. The graduates represented 30 different Texas counties, 21 different states, and the countries of the Bahamas, Germany, Japan, and Nepal.

“In this year’s graduating class, we have 38 students receiving their associate degrees who will be graduating from high school in the next two to three weeks,” said PJC President Dr. Pam Anglin. “Of these, 31 are from Quinlan Ford High School, two are from Miller Grove High School, two are home schooled and one from Greenville Christian, North Lamar, and Prairiland high schools.”

The high graduate numbers from Quinlan Ford stem from a partnership that started in 2009. Quinlan ISD pays tuition, fees and books for their students and buses them to the PJC-Greenville Center early on weekdays, returning them later to the high school.

As a result of a tie vote, the Distinguished Service Award, PJC’s highest student honor, was presented to two students this year — Mengkheang (Sam) Chek of Phnom Penh, Cambodia, and Heather Collins of Paris. The Award recognizes academic achievement and service to PJC and the community and is given to an outstanding graduating student. PJC faculty and professional staff determine the winner.

Chek is a member of Phi Theta Kappa, serves as Vice-President of the Teacher Education Student Organization, and is a recipient of the Eugene “Gene” Thielman Scholarship. Chek plans to pursue his degree at Texas A&M University – Commerce in computer science to become a programmer and teacher.

Collins attends PJC on a drama scholarship and serves as stage manager for the department. She is a member of Phi Theta Kappa, President of Delta Psi Omega, and has been on the President’s List for academic excellence for three semesters.