Home » History of the ‘Big Bell’ at SSFD
Local News

History of the ‘Big Bell’ at SSFD

In an era before fire tech, the “big bell” was king: Used for 50 years, Sulphur Springs Fire Department station bell warned of emergencies

In the 21st century where firefighting becomes ever more technologically advanced, the historical marker outside the Sulphur Springs Fire Department stands as a monument to when battling the blazes was done not via drone or remote sensor, but entirely by hand and manpower.

Sulphur Springs’ first fire fighting brigade, formed not long after the town was incorporated in 1870, was formed entirely of volunteers, according to Hopkins County historian Mattie Mae Long. They called themselves the Old Bucket Brigade, likely because of their system of firefighting. A line of men would form a row from the nearest well or pool towards the fire, and would pass rubber buckets filled with water down the line towards the blaze so it could be extinguished, Long writes.

This system continued for “a few years” until they volunteers were able to purchase a ladder and a hand pump on a cart, after which they began calling themselves The Hook and Ladder Company, Long found.

The meeting minutes of the 1884 city council approved a committee of five to purchase a fire truck for the Hook and Ladder company on which to mount their hand pump and ladder. After deliberation, a truck was purchased for $251.25 from M.A. Nelson Manufacturing, and was used until 1888, Long writes. 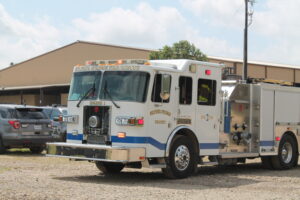 In 1885, the people of Sulphur Springs started a petition to buy their fire department a bell. During the April 25 session of the city council in 1885, the council granted $90 to build a bell on top of the engine house, although a bell would not be purchased until April 10, 1889.

In 1889, citizens had raised $27.50 for a bell, and the railroad donated a further $49.95 for the purchase of a bell. With all monies raised, the city sent off and by July 1, received the bell to hang in the engine tower.

The very same bell now hangs in front of the historical marker on Church street for all to admire. Weighing 500 pounds, it was used from 1889 to the mid 1930s to summon volunteer firemen to the engine house in case of an emergency, Long wrote.

When the bell was replaced by a siren in the 1930s, it signaled that the town was growing beyond a capacity that all within the small could hear the sound of a ringing bell. In fact, in the 1940s the fire department switched from an all-volunteer force to hiring three full-time firefighters.

When the city moved the bell from its original Davis Street location to its Church Street location in 1975, the Sulphur Springs Fire Department had four paid members and 23 volunteers. In 2019, that number is 22 full time firefighters with six trucks, who also specialize in water rescue, emergency medical response and hazardous materials just to name a few skills. The fire department has come a long way from the assembly line of rubber buckets, although they still have the ladders.

History of the Union Stockade