Lady Bears finish in 2nd place of their district 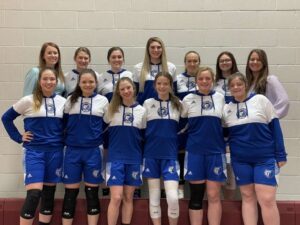 The Sulphur Bluff Lady Bears finished in second place of their district, after ending the season on an 8-game winning streak. Photo courtesy/ Zandra Peyton

The Sulphur Bluff Lady Bears traveled to Avery Tuesday night, hoping to pick up a win in their regular season finale. The Lady Bears were also looking to complete their series sweep over Avery, after beating them 49-24 the first time around.

The opening quarter got off to a bit of a slow start, though the Lady Bears were the ones in control. Sulphur Bluff scored 10 first quarter points, while holding Avery to just six points, taking a four-point lead into the second quarter.

The second frame was arguably the best of the night for the Lady Bears, as they stepped things up both offensively and defensively. Sulphur Bluff held Avery to just five points in the quarter, as they extended their lead to 22-11 at the end of the first half.

Avery answered back with their best quarter of the night to start the second half, although they were barely able to cut the Lady Bears lead to single-digits. Sulphur Bluff added another 15 points to their total, taking a 37-26 lead into the final frame.

With an 11-point lead entering the final quarter, Sulphur Bluff’s offense began to stall a bit in the final frame. Despite only scoring six points in the final eight minutes, the Lady Bears were able to fight Avery off, winning the game by a final score of 43-39.

Skylar Stanley had yet another huge game for Sulphur Bluff, finishing with yet another double-double. Stanley had team-high’s in points (13) and rebounds (15), as well as a team-high six steals.

Just behind her was Bailey Neal, who had a very impressive showing as well. Neal had 12 points, eight rebounds, four steals and three assists, playing a huge role in the four-point win.

Emma Neal finished just outside of double-digits, scoring nine points, while also grabbing four boards and swiping a pair of steals. Kaitlyn Brock was just behind her, with seven points, five steals and four assists.

The Lady Bears finish their regular season with a strong record of 18-10, going 8-2 in district play. Both of their district losses came in the early going, falling to Bloomberg 52-49 and losing a road game to Saltillo by a final score of 55-30.

After finishing in second place, Sulphur Bluff will face either Miller Grove or Ector in the opening round of the playoffs. Updated coverage on the Lady Bears postseason will be provided on Front Porch News once it is made available.

“The girls played a great game, although we didn’t shoot as well as we normally do, they played tough and tougher,” head coach Zandra Peyton said. “They played solid defense and communicated with each other the entire game.”

“This has been a fun season to coach, the girls play with passion and love for the game and each other,” Peyton added. “They each bring something unique and different to the team.”

The Lady Bears enter the postseason with a ton of momentum, ending the season on an eight-game winning streak.

SSISD board briefs for 2/7