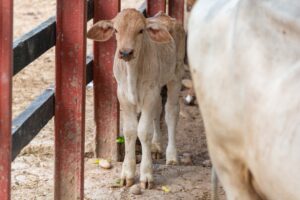 Getting or keeping cows in proper body condition throughout the winter can optimize pregnancy rates the following season.  Texas A&M AgriLife Extension information indicates that cows with proper body condition scores at calving are more likely to breed back and produce healthy calves in the future.

Proper nutrition and supplementation are two keys to keeping cows in good shape. Supplemental feeding during winter months is critical to ensure cows are in optimal condition for pregnancy, calving and future breeding. Two-and 3-year-old cows should have a body condition score of 6 or better at calving.

Ribs are covered completely with fat and beginning to cover the rump, and muscle tissue is at its greatest. Hay should be tested for nutritional quality, which will give producers the necessary information to help determine supplementation requirements.

Any supplementation plan should be based on three primary criteria – the nutrient requirements of the animal, the quality of available hay or roughage, and the current condition of the cows. Winter supplementation will depend greatly on what stage of production the cow is in.

Lactating cows require different amounts of supplementation than dry cows, those pregnant but not nursing a calf. To maintain its body condition, a lactating cow would require hay that is about 11.5 percent protein and 62-63 percent total digestible nutrients, or TDN.

Producers should start slow and build up with supplements, such as concentrates and grains, because cows are designed to consume grasses. It’s also important to feed them supplements consistently each day to avoid digestive problems such as acidosis, which can lead to founder, foot abscesses, damage to the rumen lining damage, or death.

It is recommended starting with no more than 2 pounds of supplement per cow per day and slowly building up from there. Producers should watch manure patties to monitor cows’ protein intake. If patties look like they are stacking up and are firm, that tells us we need more protein supplement.

A 40 percent cube is a good concentrated supplement source of protein, he said. Generally speaking, if cows are in good condition then 1-1.5 pounds of a 40 percent cube or something similar is a good place to start for dry cows; 2-3 pounds per day would likely be needed for wet cows, Banta said.

If cows also need energy, then something like a 20 percent cube could be a good option. With average quality hay, a common feeding rate for dry cows would be about 2-3 pounds per day per cow or 4-6 pounds for wet cows.

Feeding amounts really depend on hay quality and other factors, so for more information it is recommend visiting with a nutritionist or an AgriLife Extension beef cattle specialist.