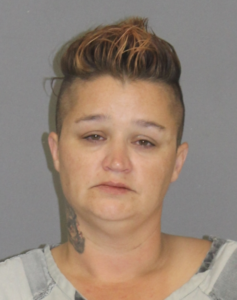 The Hopkins County Sheriff’s Office has arrested one of their own, as they state they believe a jailer was allegedly stealing medication from inmates, according to a press release.

On October 11th, jail medical staff reported that they had noticed a discrepancy in the count of inmate medication, according to the release.

“When I was notified I asked The Hopkins County Sheriff’s Office Criminal Investigation Division and the Texas Rangers to begin an investigation into the missing medication,” Sheriff Lewis Tatum noted.

Upon reviewing evidence from the jail, HCSO obtained an arrest warrant for Corrections Officer Toshia Edmonson, 40.

Investigators made contact with Edmonson at her residence and executed the warrant, charging Edmonson with: Tampering with Evidence (Felony 3), Diversion of Controlled Substance by Registrants, Dispensers, and Certain Other Persons (State Jail Felony), Theft by Public Servant (Class A), and Possession of a Controlled Substance PG3 > 28 Grams (Class A), according to the release.

“I believe that we are held to a higher standard and I am thankful for our medical staff who quickly notified us of the discrepancy,” Tatum said. “My office will always be transparent and we will not tolerate violations of law and policy by our staff.”